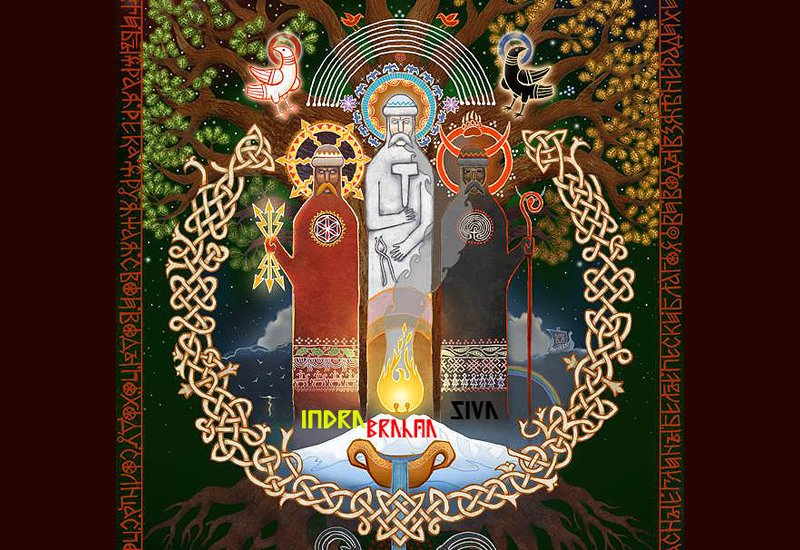 Slovenian god of the universe

We encounter the triad or trinity in nearly all religions of the ancient world. The number was sacred to all the peoples of the world, having the beginning, the middle and the end. Since space has three dimensions, it reflected cosmos. The triad of deities worshipped in ancient Egypt, Persia, Babylon, India (vedism, hinduism) reflects this belief. There was also a three-headed deity in the pantheon of ancient Veneti, who occupied the area between the Baltic and the Adriatic Sea, before the arrival of the Celts, having retained a sub-state status at the the time of Roman Empire.

In Slavic languages Triglav means the three-headed one. The image of the three-headed god  is recorded in the sources on Pomerania, in traditions of Branibor and indirectly of Carantania, where it also became identified with the highest mountain – Triglav, which in time became the national symbol of Slovenian people.

The oldest record of Triglav, the three-headed god, are inscriptions found in the place Lagole di Calalzo on the upper Piave in northern Italy. This region was inhabited by Retians, descendants of Veneti. Discovered inscriptions are in Venetic script, and are dedicated to the holy triad. They portrayed the triad deity as a figure with three heads. They don’t name Triglav, but refer to the deity as “šajnatej” – the shining one, the holy one.

Anton Tomaž Linhart, Slovenian 18th century historian, wrote that the Pomeranian and Polabian Slavs on the Baltic Sea were generally named Vendi or Veneti, and were still pagan at the beginning of the 12th century. The chroniclers Ebbo, Herbord and Helmold von Bosau report in the 12th century about temples dedicated to god Triglav. Linhart assumed that worship of the three-headed god of the northern coastal Slavs had spread into the Julian Alps.

Beside worshipping the god Triglav, the mountain Triglav stands as a visible symbol of nationhood for Slovenians. In the Julian Alps Triglav is the highest peak. In its vicinity there are other tall mountains. In this landscape spring forth pristine Slovenian rivers, the two Savas and Soča. The view from Julian peaks reaches north into the Drava valley. The whole landscape is enlivened by small idyllic lakes. In short the Triglav landscape still reminds us of the divine world, which is not just a very beautiful garden. There are mighty rocks in it, a reflection of divine all-mightiness.

Connected to Triglav is another significant concept of Slovenian folklore, and that is rajski vrt / heavenly garth, more commonly referred to as the Garden of Eden or Paradise. The image of rajski vrt and planinski raj / mountain paradise has been preserved in Slovenian folk myths. “Raj” means heaven or paradise in Slovenian, it is also connected to concepts “rad” and “radost”, meaning joy, delight. The legends tell us of Triglav paradise, of gold horned ibex Zlatorog and of the white women who inhabited this mountain paradise and provided healing magic to men in need of it.

Despite the rocky deserts of the Triglav Ranges, which had been abandoned by the enraged Zlatorog, the image of paradise under Triglav did not vanish from the consciousness of the Slovenian people. The wonderful pastures had vanished long ago, what remained was the picturesque Triglav landscape. Its steep peaks and rocky precipices, sunny meadows, green gorse, mountain flowers, are in the consciousness of the people, still the metaphor of a supernatural world.

The Triglav lore is still alive today. The mountain goats are led by the handsome he-goat with golden horns named Zlatorog / Goldenhorn. The white women made him invulnerable. Even if a shooter’s bullet hit him, wherever a drop of blood fell, either on bare rock or icy snowfield, a herb full of magic power, named Triglav rose, sprouted forth. This is the mysterious legendary flower, the flower of life, whose name has been retained in Slovenian folk tradition as “roža mogota”. One leaf of this herb, which Zlatorog would chew, would heal him at once. Even more powerful are Zlatorog’s horns. Whoever got hold of one of them, would have the key to all the gold and silver treasures, which a many-headed serpent is guarding in the mountain Bogatin.

Once a Venetian gold seeker lay in wait at the entry to the cave on Bogatin and saw how Zlatorog touched the serpent with its horn. It became tame like a lamb and allowed him to dip his horns in the golden stream running through the cave. Later he found a fragment of the horn, which  Zlatorog had rubbed off on a rock. He would be able to raise up all the world’s treasures with it, and all the days of his life he would carry heavy sacks of gold from Bogatin.

In the image of a mighty mountain with three heads (sky, earth, underworld), Triglav represented eternity and universe, which includes the world occupied by mankind. For Slovenian people and probably for their ancestors Veneti, Triglav was pater aeternus, the eternal father, master of life and death. Beside worshipping the god Triglav, Carantanians also revered the mountain Triglav as axis mundi, a representation of the cosmic mountain and a metaphor of divine cosmos, which it has remained to an extent for Slovenian people to this day.

While there are many traces of other pagan deities in folk customs and traditions, nothing has been preserved about god Triglav. Evidently he was been completely suppressed by christian missionaries. Triglav was too pagan to mesh easily with christianity, or to identify with the christian Trinity, even though it reflected a similar principle.