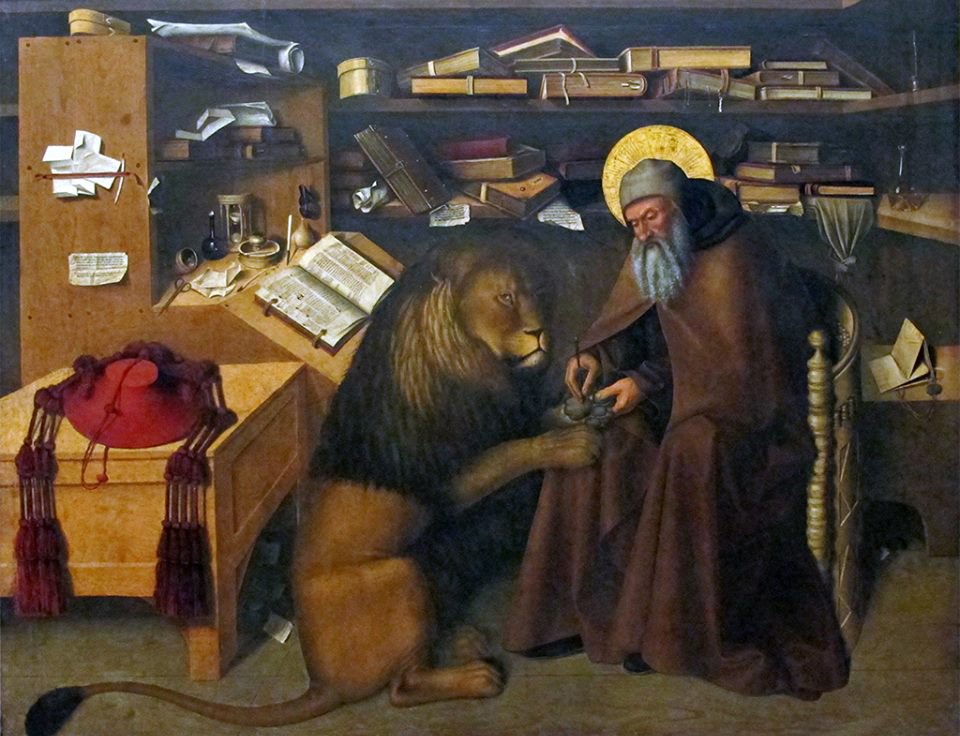 Eusebius Sophronius Hieronymus  (347 – 420 AD), aka St. Hieronymus or St Jerome in English, was a Roman, born in the town of Stridon near Emona in the territory of the present-day Slovenia. One of the greatest Christian scholars of all time, he is recognized as a Saint and Doctor of the Church by the Roman Catholic Church, the Eastern Orthodox Church, the Lutheran Church and the Anglican Communion. His feast day is 30 September.

Although no traces remain of the town Stridon, having been destroyed by rampaging Goths in the 4th century, the memory of St Hieronymus, scholar and saint is still alive among the people of the Mt. Nanos country, the Karst region of Slovenia. It has been preserved in the sacral legacy that has survived the passage of 2000 years.

Hieronymus was born in a Christian family. His father Eusebius was a well-to-do land owner in “Stridon near Emona”, the present-day Ljubljana. Educated at home until he was 12 years old, he was then sent to pursue his studies in Milan and Rome where he studied Greek and Latin classics. He was ordained priest and later entered the monastery in Triers. In 370 he spent time in Aquileia, where he was linked with an ascetic group. His stay in this important cultural centre led to his establishing links with a Christian community in Emona. In 384 he travelled to Bethlehem, the place of Jesus’ birth. He lived in Palestine for 30 years and died in 420 AD.

St. Hieronymus left to the Church a rich written legacy: collections of dogmatic-polemic works, moral-ascetic works, commentaries on Scripture, and historical works. He corresponded with numerous persons upon a variety of questions. About 120 letters, considered as authentically written by him, have been preserved.

He was known for his teachings on Christian moral life. He focused his attention to the lives of women and identified how a Christian woman should live her life. He had strong patron relationships with several prominent female ascetics who were members of affluent senatorial families.

From the late 4th to the late 6th century, Emona was the seat of a bishopric that had intensive contacts with the ecclesiastical circle of Milan, reflected in the architecture of the early Christian complex along Erjavec Street in present-day Ljubljana.

Stridon had been destroyed by Goths, and nothing remained of it to indicate its location. Hieronymus himself left a clue about the location of the town. when he wrote that the town lay “near Emona”. Croatian archaeologist Matej Suić had published a paper, which placed Stridon on the border between Croatia and Slovenia, in the hinterland of Rijeka. Other researchers have disputed this. If Hieronymus’ birthplace were in Istria or in the vicinity of Trieste or Rijeka, that is how it would have been recorded.

In 2007 the Slovenian historian and archaeologist dr. Rafko Valenčič published his own hypothesis about the birth place of St. Hieronymus in his book Sv. Hieronim – Mož s Krasa (St. Hieronymus – The Man of Karst), drew considerable interest in Slovenia, particularly among the people of Slovenian Karst, the Mt. Nanos country.

Reviewing all that had been written by historians and archaeologists about the birth place of St. Hieronymus, dr. ValenčIč put forward his hypothesis., that Stridon had been located in the southern Slovenia, somewhere in the region “of triangle Rijeka – Trieste – Postojna”.

In his opinion this is born out and reinforced by an additional historical element, the sacral heritage of the area.

There are 12 churches and chapels consecrated to St. Hieronymus in the villages of Mt. Nanos country and Pivka Valley: Bošamarin, Ivanje selo, Knežak, Koritnice, Kozana, Nanos, Petkovec, Vransko, Topolovec, Jasen (consecrated to Eustachius in 1694, to Hyeronimus in 1784 and later to St. Joachim), Slavina (location is unclear but it is recorded in parochial archives).

There is further evidence of the place of this saint in the memory of the local Slovenian population in the sculptures and depictions of St. Hieronymus in the altars of churches in Koper, Hrastovlje, Podnanos, Strunjan, Matenja vas, Dolnja Košana, Piran and Maribor.

This sacral legacy points to a 2000 years old tradition and well-established settlement of the Slovenian Christian population in this area, preceding the presumed arrival of eastern Slavic tribes in the 6th century AD.