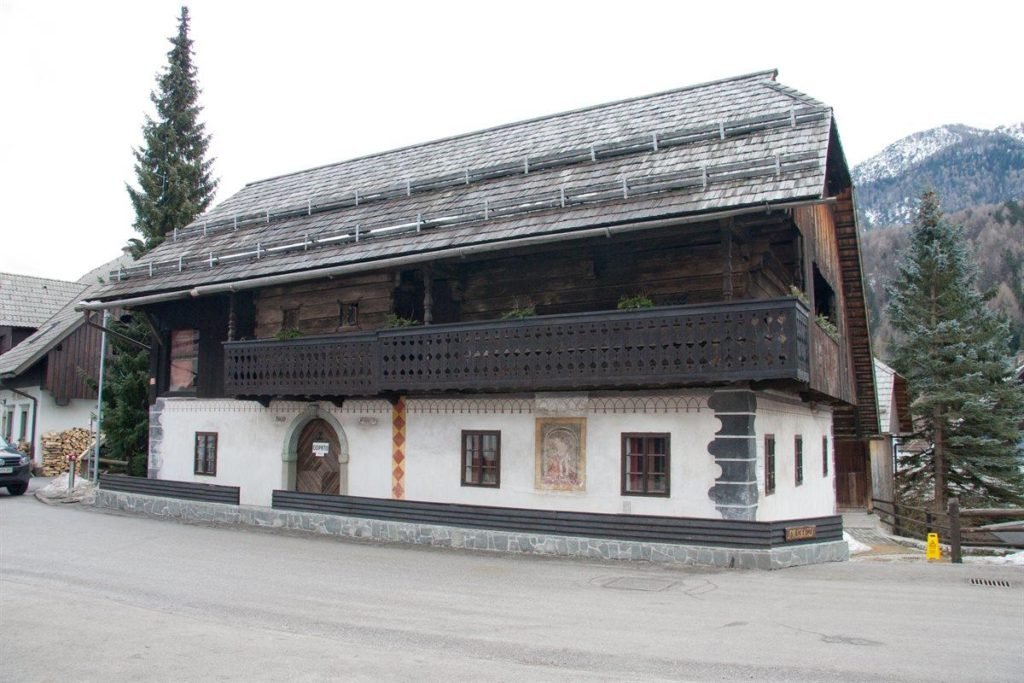 In the centre of Kranjska gora, the old name was “Borovška vas” (Borovška village), stands the Liznjek homestead. As an example of vernacular architecture of the past centuries it is right that we should make it an object of our attention and spend some time on it. Thoroughly renovated in 1983 and placed under heritage protection, Liznjek house brings to life the traditional Upper Sava Valley architecture of several centuries ago, when the facades were decorated with frescoes, houses had handcarved wooden balconies, the interior of houses was embellished with painted furniture and the rooms were aromatic with wood smoke, wrote Tone Cevc in the book Kmečke hiše v Karavankah (Farm Houses in Karavanken). The painting of furniture as an art form, was the most developed in Kranjska gora and surrounding area.

Functional layout of rooms on the ground floor of Liznjek house highlights the well established residential culture of country houses in the valley during the first half of the 17th century, which has been preserved till recent times. On the ground floor there is a walkthrough entrance hall, which opens on one side into the “hiša”, the main living area, and the black kitchen with a large fireplace, and between the two areas “hišna kamra”, the bedroom. On the other side, the hallway opens to the left into a walkway and “vežna kamra” (hallway room) and walkway into the “timnata”, the dark storage room for storage of food, kitchenware, etc. At some later stage the fireplace was removed and the black kitchen used only for drying meat and for preparation of pig feed. The fireplace that is in place now is a reconstruction of the original; on the velb (the arch) above the fireplace, we can see the original hook where the cauldron was hung in the old days.

The house had received its present shape as a prosperous homestead of a “gruntar” (big landowner) towards the end of the 18 th century; the original house was considerably smaller. To the building consisting of hallway along one side, the black kitchen, the living area and the bedroom, were added two rooms on the other side of the hallway. In the attic two small rooms were built, constructed of wood. No changes were made to the old living area of the house, indicating a high level of residential culture in this part of Gorenjsko, particularly because of their artistic qualities. The house is of a particular local type, with the stable for small cattle beneath the residential area.

Today the house is a museum. The more recently added rooms, together with cellar and attic rooms, have been converted into exhibition space. The facade of the building is decorated with a fresco, in the style of old fresco painting of the 17th century, and seamed house corners. The baroque front door frame is constructed of green stone, indicator of centuries old stonecutting tradition in Gorenjska (Upper Carniola). Most interesting is the wooden ceiling in the largest room, particularly the central carrying beam with the carved date 1781 with a neat rosetta.

The rooms are furnished with objects, which originate in the valley. Some of them are part of the collection of Gorenjska Museum, some were donated by the local inhabitants. In “hiša” (living room) there are reconstructed benches and “late” (slats) by the oven. In the corner, “bohkov kot”(little god corner) stands the maple wood table, where the family gathered to eat on feast days; on ordinary days they ate at the “mentrga”, the kitchen table with a trough for making bread, where “gospodinja” (housewife) once a week kneaded bread for the whole family. The trough was also used as a sleeping space for small children, since they were quite numerous. In “hiša” there is also the wide decorated bed, intended for grandparents or anyone, who could not find a space on top of the oven, kept warm throughout the winter.

The parents and the youngest child slept in the main bedroom. “Leve” was called the small wall aperture, next to the doorway, where matchwood for lighting was kept. Smoke was ducted into the attic. There was also “tabernakelj”(tabernacle), a wall cupboard for storing valuables (money, jewelry, documents, holy water, brandy). In Liznjek house there were two tabernacles, one for the master, one for the mistress.

With 84 hectares of land, the Liznjeks were the wealthiest farm in Kranjska gora, actually the only so-called full farm. That is to say, the farm produced everything that the family needed to live. Other farms were half, third or quarter farms, those without land were kejžarji or kočarji (cotters). Wealthy farmers were obliged to cook a meal for the needy once a week, a nourishing thick vegetable soup. They prepared it in the cellar, and regarded it as a matter of pride and status.

Part of the Liznjek homestead are the renovated outbuildings of 1796. The stable with the barn is actually the central building of the homestead. The building is two-storeyed, with the barn for storing hay above, and two stables for the sheep below. The building is functional, so that at hay-making, it is a simple matter to store the hay, and in winter easy to feed the animals. The majority of exhibits – lojtrnik (for transporting hay), kočija (carriage), and others were donated by Vanja Ulčar from Podkoren.

The house is open to visitors every day except Monday, and closed in April and November, during the dead season in Kranjska gora.