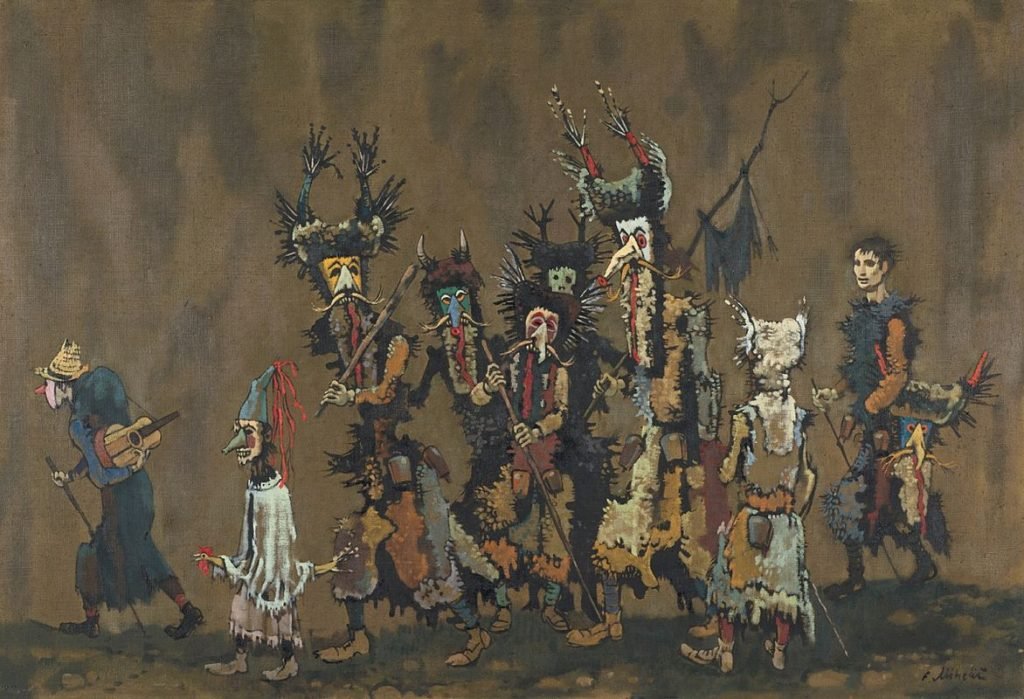 God Father of the Nation

Korant was god father of his people. This is possible to infer, among other evidence, from preserved forms of his name. The name Korant or Kurent, is related to Korotan and the ancient people of Noricum, the Carni, ancestors of Carantanians.

The ancient sky father, here in the guise of the father of the nation, was preserved in many humorous stories under the name Kurent. Particularly amusing and characteristic is the tale where people and even death are made to dance by his flute, and are unable to stop. In shepherd cultures the flute has magic power. Some perceive in its sound the symbolic union of lovers. Among the ways, with which man has expressed his life force through the ages, dance is foremost. In some cultures an encounter with the deity was sought in ecstatic dance. This is what Korant or Kurent essentially is. From the preserved inscriptions it is possible to surmise that Romans included him in their pantheon and knew him by the latinized from of the name, as Casuantanus or Caruantanus.

Volčji pastir (Wolf Shepherd) protects people and their herds. His origin is in prehistory, in the Great Spirit of the period of the hunters. They perceived him as Master of Animals, with reindeer and bison horns. Animal masks that appear in the company of Korant are still a reminder of the ancient Master of animals.

Quite a few traces have been preserved in Slovenian folklore on god Korant’s place in the Carantanian pantheon. His figure is reflected in folk customs, specially in winter time. Yet he was not the god of winter, threatening people’s existence with cold, snow and tempest. On the contrary, he protected his people from winter and death. After christianization his figure was largely replaced by St. Martin, whose name day heralds the beginning of winter, and partly also by the benevolent St. Nicholas, who makes his village rounds accompanied by parkelji (the horned ones).

On Martinovo (St. Martin’s Day) ceremonial rounds have been preserved in many places around Europe. Children usually walk around carrying lamps and singing. Sometimes the rounds are noisy processions of adults. They stem from pre-Christian times, when the pagan world thanked the deities for produce and prayed for the early return of the bright day.

Opinions vary on the deity that St. Martin replaced. Some speak of a Celtic deity. I believe that it could only have been local and Venetic. About the time of St. Martin’s Day, the grazing season is over, and everywhere in Europe shepherds thank God for safety of their herds, secure in the shelter of their barns.

On the ancient Carantanian territory there are 260 churches dedicated to St. Martin. On the present Slovenian territory there are 120. The oldest among them stem from the 9th century. In Carinthia, the central land of ancient Carantania, St. Martin has 44 churches and here the greatest number places are named after him. Where the auxiliary church of St. Martin in Lower Trušnja, near Velikovec now stands, there had already been a church at the end of the 8th century.

At the well-known pilgrimage of Sveta gora (holy mountain) on the River Sotla, two chapels ahave been preserved near the church of Our Lady. One of them is dedicated to Sv. Jurij (St. George), the other to Sv. Martin (St. Martin). The chapels stem from before year 1000. It is probable, that a pagan temple once stood there. The saints, to whom the chapels are consecrated, are significant: Sv. Jurij (24 April), who launches the farming year, and Sv. Martin (11 November), who closes it. Could it be that the first succeeded the god of spring, and the second the god of winter?

Sv. Martin probably replaced the Master of Animals, who had replaced the Wolf Shepherd. All three have protected herds from the wolves. There is a Koroška legend which supports this view.

In the rituals of wine tasting it is possible to discern the figure which reflects the ancient god father, the Great Spirit, Wolf Shepherd. He is also recognizable in the figure of parkelj, the horned one, at the festivity of St. Nicholas.