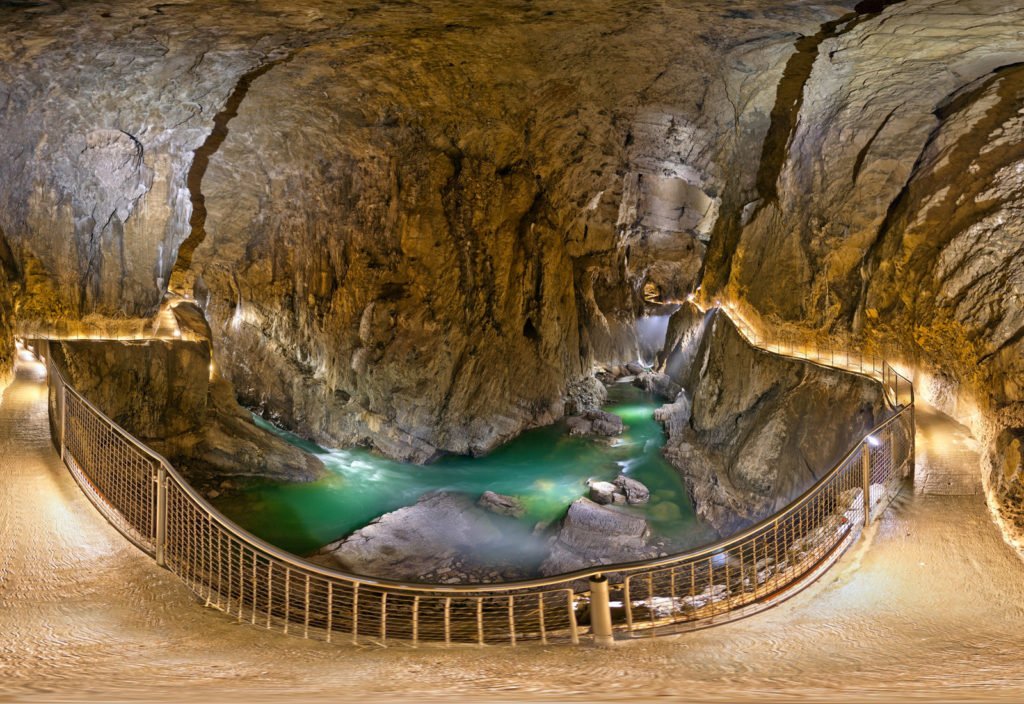 Kras region cradle of karstologySlovenia is the home of karstology, speleology, and speleobiology. The Slovenian Karst is the most prominent cave area in the world. Slovenian words have been adopted internationally in the study of caves: dolina, polje, and ponor.
The science of Karstology was named after the southern Slovenian region Kras. Karst is the scientific term for similar land formations. “Karst” means “a rocky waterless limestone surface with underground formations occurring through the chemical action of water on soluble stone.”About 9000 km2 or 44% of the territory of Slovenia can be classified as karst area. Over two thirds of this territory (6300 km2) consist of limestones, mainly mesozoic, whereas karst areas on other rocks (dolomite, conglomerate, calcarenite and breccia) occupy some 30% of the entire karst areas of Slovenia. One third of Slovenia’s surface area is composed of limestone with karst phenomena such as: dolines, sinkholes, poljes, uvalas (poljes with tilted bottoms), blind valleys above swallowholes of streams, and dry valleys. Over 8,000 karst caves are registered, and it is estimated that about half are yet to be discovered. Twenty-five caves are open for tourists; among them are: Postojna, Pivka, Črna jama, Planina, Škocjanske jame, Dimnica, and Križna jama. In 1986 the Škocjan Caves were registered on UNESCO’s list of the world’s natural and cultural heritage sites. The spectacular underground canyons in the Škocjan Caves stretch ninety metres from floor to ceiling. In the Postojna caves is the unique cave animal Proteus anguinus or “human fish” with its long body and atrophied eyes; has become a symbol of Slovenia’s karst underworld. It was described in 1689 by the Slovene polymath Janez Vajkard Valvasor in his ‘Glory of the Duchy of Carniola’.
Vilenica, where local people took refuge from the Turks, is probably the oldest karst cave opened for tourists in the world, in 1633. “Vilenica” is now the name of Slovenia’s annual international literary award, presented within its Dance Hall.

2. Give a talk
Text-type: talk
Linguistic element: noun – locative case
Give a talk on the Postojna caves. Include details of the cave system, and proteus anguinus.
http://www.postojnska-jama.si/en/cave.htm
http://www.burger.si/Jame/PostojnskaJama/UvodENG.html

4. Write a letter
Text-type: letter
Linguistic element: verb – past tense
Write a letter to a friend about your visit to the Sežana Caving Club

Answer the following questions in English.
1. How are the Škocjanske caves protected?
2. Where is the park situated?
3. What does the park encompass?
4. What do the employees of the park do?
5. How long is the cave system?
6. Which river runs to the source of the Timava River?
7. What is of interest in the village of Škocjan?