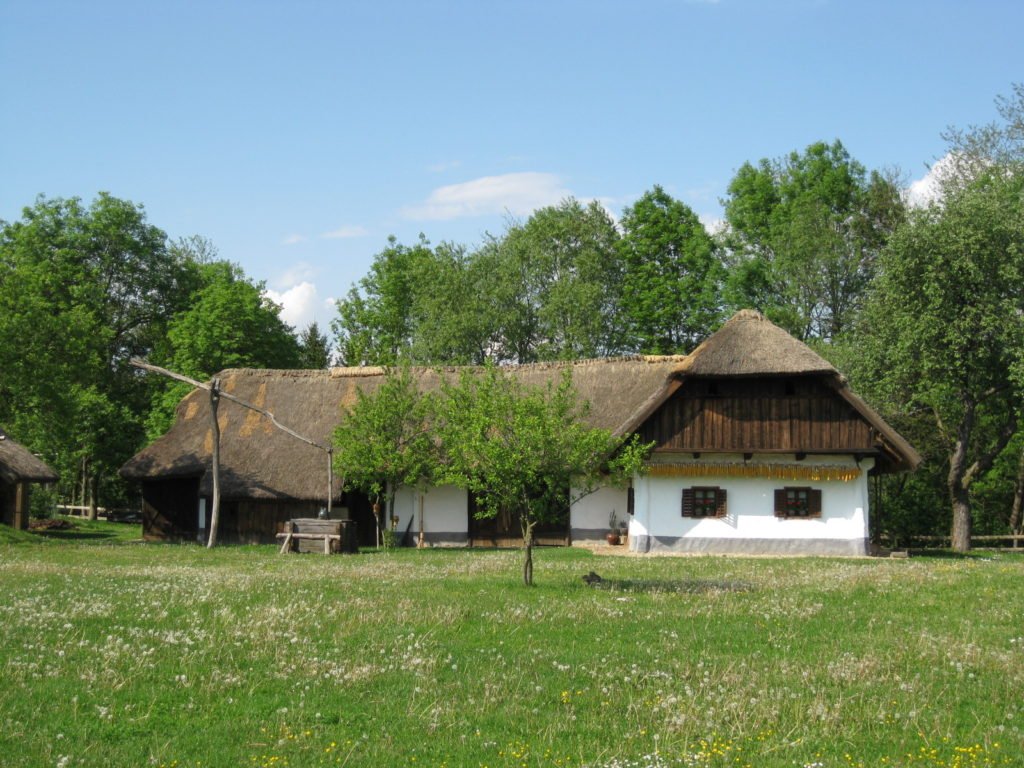 More than a museum

It is located in the village of Gorišnica on Ptujsko polje of the Štajerska region, on the main road Ptuj/Ormož. The cultural heritage homestead stands some 100 metres from the centre of village, probably on the edge of the village 300 years ago. At the distance of 50 metres from the main road, it might be easily missed by the car driver, if it were not for the road sign indicating its location. The space between the road and the homestead serves partly for parking, party it features a grassed over space with dug-in cellar. The last inhabitant, who died in 1990 at the age of 96, was known in the neighbourhood as Dominkova Kata. A known herbalist, she grew in her garden a great number of medicinal herbs. Kata lived quietly as the mistress of the household for 40 years, taking care of the house and a small farm about 3 hectares, known in that part of Slovenia as želar (a small sized farm).

The homestead began to deteriorate after her death. Before it was too late, the local community realized its value as a historical record of life on Ptujsko polje at the end of the 19th and beginning of the 20th century. The municipality acquired the homestead in 1997 with the assistance of the Ministry of Culture, and began the restoration. The work was supervised by the Institute for the protection of natural and cultural heritage Maribor. The ethnological expert most engaged in the project was Jelka Skalicky.

The house is now completely renovated and maintained in an exemplary fashion. In a relatively short time the Dominkova homestead achieved recognition in the wider Slovenian context, so that there is no manual or book on Slovenian cultural, ethnological and architectural heritage, without an image or short description of the house. It is presented as typical, often as the only traditional Pannonian house preserved in its entirety.

Dominkova House and its outbuildings

The residential and farming part of the homestead are attached, forming the letter L. The building is made entirely of wood, the beams coated thickly with clay (local name for this type of building is – cimprača). The straw-covered roof features two widely jutting eaves. Unique is the wooden chimney, that has never once caught fire according to the locals.

The rooms are designed in a typical manner: entry hall with black kitchen, living room with bread oven, another room and pantry. The doorways and ceilings are low. The open fireplace has been preserved in the arched black kitchen, and a great variety of original tools and utensils as well. In the living room the original bench encircling the bread oven can be extended into a bed. Interestingly, above the table, in the traditional little god corner (bogkov kot) hangs not the usual cross, but a statue of Virgin Mary. It is said that this occurs in homes where the woman has the greater say. In Dominkova House the cross is hung in the centre of the wall. The little Virgin Mary altar was made by Kata’s husband, who died in 1942. He also made the large altar standing on the small cupboard, where Kata used to pray every day.

The non-residential part of the homestead appears to demonstrate the inventiveness of the people in this part of the country, exhibiting many farming solutions and tools. There are six different spaces, each serving a particular function of a prosperous farm: threshing floor, stable, cellar, workshop, and at the back, storage for strewing straw or dry leaves, and the winter cellar. It is an indication that the older principle of everything in the one space has been left far behind.
Of the articles and tools exhibited it is worth mentioning handmills (žrmlje) for grinding wheat, kneading trough (nečke), stamping mill (stopa) for buckwheat or millet groats (kaša), krpele for carrying stable straw or dried leaves (stelja), two kinds of fire tongs (burklje), one to move clay cooking pots, one to move iron pots, etc.

Dominkova Homestead is today more than a museum. Medicinal herbs are growing in the garden, on the field in front of the house they still sow corn and maize(sirek), plant garlic and other produce. They regularly cut the grass and generally keep the place neat. The trellis (brajda) on both sides of the property has also been restored. It is a community effort. Most of the work is done by the pensioners of Gorišnica, some by the school youth studying the life of ancestors, that they at least in part still share.

The local school is closely connected with the Dominkova Homestead, but schools from all over Slovenia, students of ethnology and architecture, the pensioners, the emigrants visit the homestead. It is also used as a study workshop for school groups, and shown to official visitors. This work is the responsibility of two retired teachers Frida and Anica.