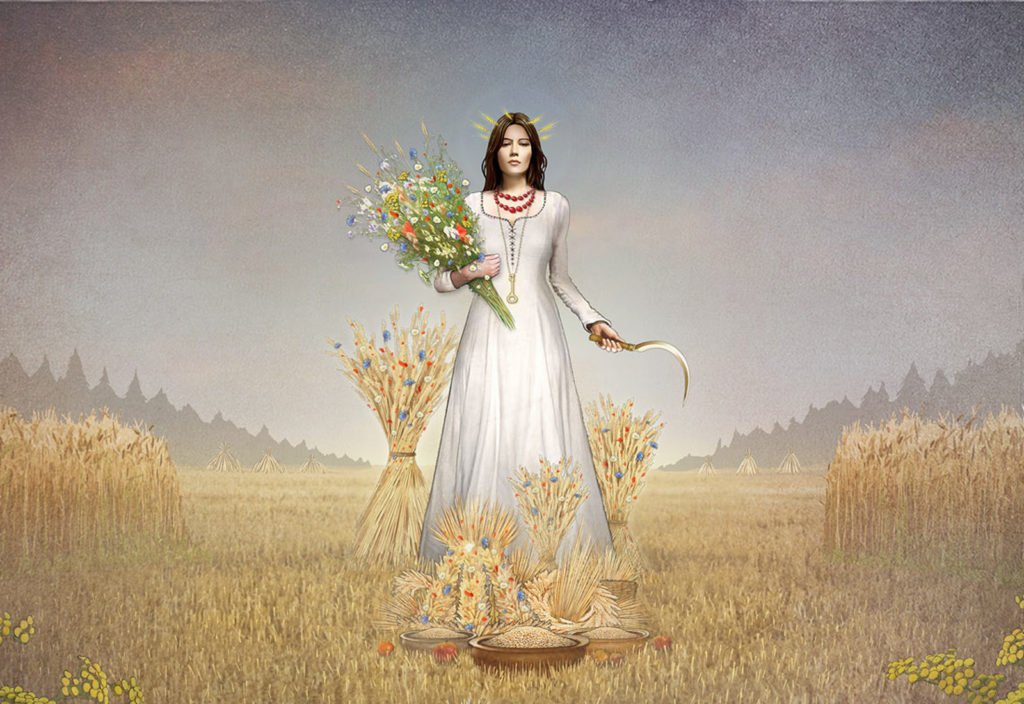 The cult of the Great Goddess, which in the culture of agriculturalists was identified with mother Earth, was preserved in the patriarchy together with the Sky god.

Earth acquired the character of a field deity, primarily as the goddess of wheat. In the centuries before our era we know her under the Greek name Demeter, and Roman Cerera.

The Friygian  Zemele, as the name itself indicates, goddess of earth, also finds her way into Greek mythology. She is mortal, and in Greek mythology initially not yet goddess.

Frygian name Zemele means earth in Baltic and Slavic languages, the ground, the world. Its identification with the Greek Gaia has been preserved by Latvians as mother earth Žemyna, by Lithuanians Zemes mate, and categorized as blossoming and sprouting. They revered her still in the 18th century (Gimbutas, 159). In Slovenian the word “zemlja” literally means earth both as a planet and as soil.

Earth was seen as mother already in the beliefs of the primitive man, to whom she was birth mother and nurturer. The image of the earth as mother has been continually preserved in the tradition of Indo-European nations. It has also been preserved in the tradition of the Venetic people, who inhabited the territory between the Baltic and the Adriatic Sea. The earth was their deity. But among the deities of their descendants, western or northern Slavs, whose pantheon is known to us from the 12th century records, we don’t come across her name. Evidently the chroniclers were not aware of any temple consecrated to her, so did not record her existence.

Her true temple was actually the earth itself, this is the ground and the surface as a whole. Man worshipped his universal mother every day: in the fields, on pastures, on the way, in the mountains…. Her original name was Zemlja/Earth. This is most probably the reason why chroniclers failed to realize, that earth was at the same time the ancient goddess Earth.

In the region of Eastern Alps, Venetic kingdom Noricum in the pre-Roman period, which later became Caranthania, it could not be otherwise. Among the Norico-Roman deities, the goddess Noreia, mother of the land and the people occupied the first place. The role of the goddess is political, since it represents Norican kingdom. In its origin and in people’s belief Noreia is ultimately still mother Earth. This role is retained also in later Carantania.

There are definite indicators that support this theory. An exceptional find in the Štajerska region is a cult wagon with a female figure that is believed to be goddess Earth, particularly since the cauldron on its head symbolizes prosperity. There are also inscriptions in the Venetic script and language deciphered by Matej Bor, which indicate worship of goddess Earth and a festival in her honour.

Another significant pointer to the worship of Mother Earth in the Norican area are the local chief female goddesses, Noreia in Noricum, Raetia in Retia, Histria in Istria. We may surmise that each of these goddesses was identified with the people of the area, and that they were originally the Mother Zemlja, who was simply was given the name of the land where she was revered.

There are other elements of Slovenian folk tradition that point to the worship of Mother Earth in custom and beliefs, that support the existence of goddess Zemlja / Earth. There are strong indications that the Feast of Mary’s Ascension, which includes a very old custom of blessing flowers and herbs, and was recorded as early as the 10th century, was originally the ancient feast Mother Earth in Slovenian lands. At the feast the priest blesses flowers in a special ceremony. These sprays were preserved at home to use against fire and lightening, they stuck them in the cattle byre and fields, mixed them into cattle feed and seed wheat, laid them in the marriage bed and children’s bed….. The blessing of the flowers has been preserved in Pannonia: Prekmurje and Porabje, in Makole: Štajerska, in Brda and in Beneška Slovenija. In Medana and Brda they bless the so-called “rožanke”, as they call the yellow field flowers, then they tie them to the pole called “mlaj”(may-pole), which is placed by the wayside where the procession is to pass the following day with the statue of Mary, that they carry on a golden throne. Traditional festive bread, “pogača” is also baked in some places on “Veliki Šmaren”, which is shared by all the members of the household.

It is evidently a matter of ritual bread, symbol of thanksgiving, in older times directed towards mother Earth. At the same time it is a return for work completed, more in a spiritual than in material sense. Every harvester receives a piece of ”pogača” even if they helped no more than for half a day.