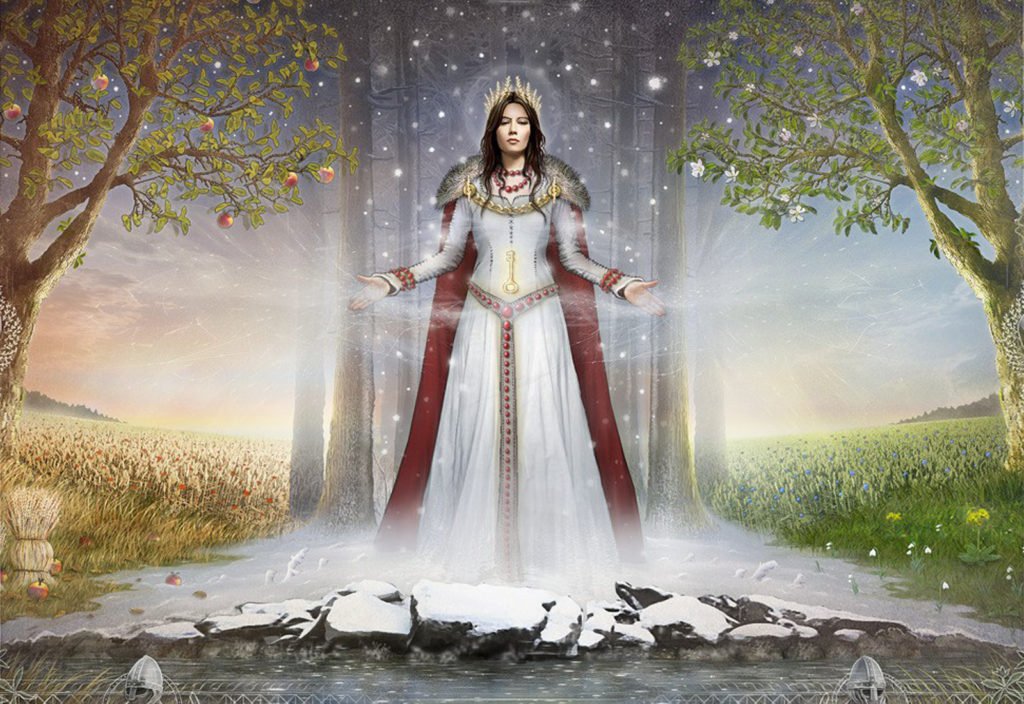 Goddess Zora and god Pust, heralding the end of winter and darkness, celebrated their feast day in February. In ancient Carantania the feast of spring was also observed, most probably during the final days of March, but not on the same day everywhere, since spring arrives in some places earlier than in others. It is heralded by the spring flowers: snowdrops, primroses, catkins, violets. They are a sign that the earth is awakening, and it is time to begin work in the fields, particularly ploughing.

Spring was personified in Carantania by Vesna the goddess of spring. Her name has not been preserved in this meaning, we do encounter her however in the myth of god Kresnik. Vesna has more of a presence in other Slavic nations, particularly among Russians and Ukrainians. That is why she is generally presented as Slavic goddess.

The name Vesna means spring. We surmise that Vesna’s place as goddess of spring is chiefly in the mythology of indigenous peoples of the northern and eastern Europe. She does not appear in northern Africa and Mesopotamia, where the herding and farming cultures of prehistoric times originated. She is also not present in India. The reason is simple. These areas do not have four seasons or a distinctive springtime. Even in the Mediterranean region there is far less of a crossover between the cold of winter and warmth of spring.

In the central, northern and eastern Europe spring is the season when all the agricultural work begins, an occasion for great solemnities. We surmise that spring festivities were held already in prehistoric times from the beginning of herding and agriculture. It is not clear however, whether she had always been perceived as spring goddess, or as a supernatural phenomenon.

The arrival of spring must have been greeted by Slovenian ancestors with a special feast, probably at the equinox on 21 March. It would seem that the Christian feast of Cvetna nedelja (blossom Sunday), Palm Sunday in English, expressly maintained and preserved the feasting connected with the arrival of spring in pagan times, once upon a time personified by goddess Vesna. This is when Slovenians bring butara (sheaf) to church for blessing.

Butara personifies Vesna, the ancient goddess of spring. Hardly a trace has been preserved of her in Slovenian tradition, but many elements point to her. Switches contained in a butara indicate herding of animals. In some places they include the blessed switches used by shepherds when they first take the cattle to pasture in the spring.Slovenian ethnologist Niko Kuret says about the celebration of Palm Sunday: There is no Slovenian village or town, where they don’t bring, sheaves and bunches of spring greenery to church for blessing. The custom is recorded in Europe already in the 9th century, an indication that it has possibly overlaid an older, pre-Christian ritual linked to certain “holy” plants – trees, bushes, herbs and flowers, which were believed to stimulate growth, encourage fertility, drive away evil magic and illness, protect against lightening and other wild weather damage. <

Vesna’s tree was the willow. In butara the spring symbolism of the willow is quite distinct. It is possible that butara represented Vesna in the past, when they did not yet imagine her as a young woman with flowers, as she is portrayed today. She may have been simply a phenomenon of the supernatural world, and the willow her most visible symbol. Among the names for butara, stands out Cvetnik in Koroška, meaning the blossoming one. The name is reminiscent of Cvetnica, the Feast of Blossoms (cvet means blossom), which may be another name for Vesna.

If we go deeper into the spiritual message of butara, it becomes clear, why it is called simply cvetje (blossoms, flowers) after the solemn blessing in Rož. These are the flowers of life, symbol of life in natural and supernatural sense. With the twigs they used to sprinkle blessed water over the cattle and fields. They still sprinkle the dead departed with it today. On the three holy evenings of the year, the house, the stable and the barn are still blessed with the smoke suffused from butara.