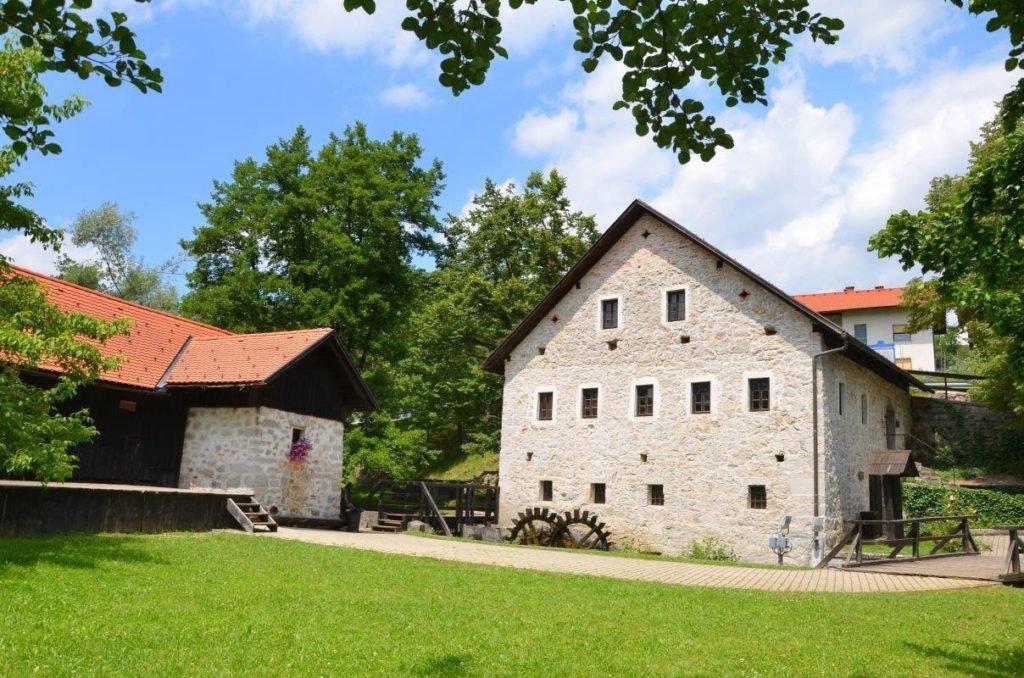 The Trubar Homestead has now become a renovated and well maintained museum of several buildings:

*saw mill beside the stream

*homestead – adapting the stable into the inn/gostilna, the barn/skedenj was turned into the gallery, the attic above became the Trubar reading room/ Trubarjeva čitalnica. The granary/kašča is presently reception with the sale of memorabilia.

The three buildings stand on the spot, where Trubar homestead stood, the house where he was born in 1508, with the mill and sawmill, however the present buildings are of more recent date – merely 200 years old – rather than 500 years, when Trubar was born. The Trubar house of 500 years ago was a wooden construction, which was probably burnt down several times during the Turkish incursions in whose path stood the village Rašca.

What we see of the homestead today would have been in ruins, if it had not been restored in more recent times. This is particularly true of the wooden sawmill, which was renovated by the Forest Management Velike Lašče 1986. In that year, 400 years anniversary of Trubar’s death, all the, buildings were restored, after the last proprietor, Jožef Pečnik moved away. Present owner of the Trubar homestead is the Velike Lašče Municipality. It is now some twenty years since the restoration of all the buildings, which Slovenes will celebrate in due course. The whole homestead with all its buildings now functions as a museum, which is open to visitors every day, the organized and booked groups there is also on offer a guided tour. All the buildings are marked with the sign “cultural monument”.

The whole village of Rašca is also protected, together with the statue of Primož Trubar by Vinko Glanz, errected on the crossroads, on the occasion of the 400 anniversary of the first published Slovenian book. A few steps further, on the banks of the Rašca river bellow the village Rašca, stands the Trubar Homestead. In the time of Trubar Rašca was an important trade and transport center of the Velike Lašče county. It developed at the crossroads of commercial and small trade routes from the Stična Monastery towards Triest and Vipava vineyards, and the routes from Ljubljana towards Kočevje and Reka. In the 16th century it belonged to the Masters of Turjak.

Water sawmills appeared in Slovenia as early as 14th century. Among the buildings of the Trubar homestead, it was most likely the sawmill, which was the oldest, and the most interesting from the ethnological perspective. It is more than 200 years old, and the only sawmill of the twenty-five once active on the river Rašca and its two tributaries. The sawmill on the Trubar homestead was the so-called Venetian single/ venecijanka samica, which means that the yoke has only one sawmill leaf. The water wheel of the sawmill has the span of 3.20m, with 36 paddles on the rim. The yoke moved with 150 turns (revolutions) a minute, depending on the wood. Daily it was possible to saw around 10 cubic metres of wood.

The sawmill was a component part of the homestead, with a variety of activities. Sawyers were millers and vice versa. They were also engaged in farming and breeding pigs, which brought a good income. On the Trubar homestead there are the visible remnants of a pigsty. The social status of sawyers – millers was considerably higher than that of farmers, who were jealous of them. On homesteads with a sawmill and mill people did not go hungry. To gain strength for a working day they consumed “žganci”(buckwheat meal) with cabbage, turnips, eggs or milk. In the morning and afternoon break they ate bread, accompanied by lard, sour milk, bacon, sausages, wine, apple cider and brandy. The noon meal consisted of soup with “žličniki”/spoon dumplings, potatoes, cabbage, ‘šstruklji’ dumplings with filling, turnips, “močnik” /porridge, “ješprenj”/barley soup. In the evening the workers were offered various porridges, bean salad, kaša, potatoes, “žganci” (buckwheat meal) with cabbage, turnip or milk.

Memorial house with memorial hall and mill is the largest stone building on the Trubar homestead. There is nothing much to be said about the mill, the hall however is large, taking the whole top storey space. The space is suitable for various cultural events. Among other events, there are discussions with poets and writers, chaired by the poet Tone Kuntner under the slogan: Na Trubarjevini v čast domovini/On Trubars’s land in honour of homeland. On the walls there is a summary of Trubar’s life and work, in window frames, glass is replaced by colour portraits of significant personalities of his time, as for instance the Triest Bishop Bonomo and German reformer Martin Luther. On show in round glass cases there are Trubar’s books and manuscripts.

As mentioned earlier, the farm building was changed from the stable to the inn, the barn became the Galerija Skedenj (Barn Gallery) , above which there is a special space named Trubar’s Reading Room/Trubarjeva čitalnica. In the erstwhile granary we now have the reception and sales. In the gallery Skedenj photographic exhibitions take place, from September onwards the Skedenj becomes a book- binding workroom and other additional education programs for school groups. Trubarjeva čitalnica contains a permanent exhibition of Trubar’s publications and publications of other protestant writers.

Translated from Slovenian by Aleksandra Ceferin