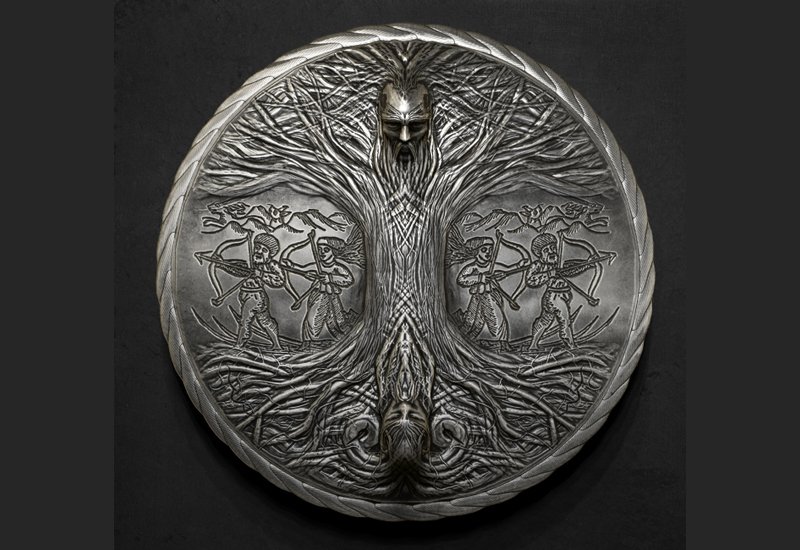 The Home of the Departed

The idea of the next world where the souls go is deeply rooted in the old beliefs of the ancient Slovenians. Some gods accompanied the departed into the next world, particularly Vodin, to be replaced after christianization by St. Michael, St. Christopher and other saints. This was usually a place beyond a great water, where the departed go or deep underground where the river of life is flowing, and there is peace.

Punishment for a great sin was being turned to stone. It was the penalty for desecrating the holiness of the day through revelry or debauchery. Those who profaned or violated God’s order were turned to stone for ever. Such is the tale of the beautiful valley, and the inhabitants who profaned the holy day, would not listen to warnings and so were all turned to stone. On the old Carantanian territory topographic names can be found everywhere, that are a reminder of people who had sinned against the divine order and so were turned to stone. For evil deeds against people the punishment was a curse. Once freed from the curse, one can enter the world of the departed and be at peace. An exceptionally worthy life is possibly rewarded with Garden of Eden which is imagined high in the mountains, where rajska ptica (bird of paradise) sings and time stops.

According to Carantanian belief the souls of the departed mostly went to the lower world, the underworld, which is the domain of the Mother Earth/Zemlja. Its visible image is the cave, which gives shelter, as we have seen in myths of Kralj Matjaž (King Mathias). Paintings in the caves in prehistoric times are evidence that such beliefs have ancient roots. Cave as the interior of the earth is connected with birth and death of man. It was possible for the living to enter the when lowered down into a bottomless cave. The underworld is a reflection of our natural world and is perfectly beautiful. In this lower world there is peace and no suffering. In some settings one can hear the voice of God in the metaphor of the singing bird. In the rich symbolism of birds that we encounter in the legends of the antiquity and in prehistory, the motif of the singing bird is characteristically Slovenian. This invisible rajska ptica (bird of paradise), sings so marvelously, that one cannot draw away. A miner in Idrija heard its song issuing from the abyss beneath the rock of the hill Tičnica (580 m), rising above the town.

It is on the other side of the great water or high on the mountains. Paradise is for the redeemed and the blessed. Its name in Slovenian is raj. The word “rajni” indicates in this context the inhabitant of “raj,” the blessed departed.

In pre-Christian Carantania raj is a marvelous garden, full of flowers, somewhere in the mountains, and intended for deities. If an ordinary mortal happened to enter it, he committed a great sin and was punished. In Carantanian belief raj does not only refer to Triglav, but also to other high mountains. Janez Trdina records it in his legends about Gorjanci, the mountain range of Dolenjska region, and calls it cvetnik (flower garden).

Somewhere in Gorjanci black rocks are rising high. Among the rocks is laid out Cvetnik, a small garden, full of most beautiful and wondrously fragrant flowers. These rocks are hard to find, harder still to cross and reach the marvelous garden. And this is just as well! If by chance someone found himself in Cvetnik, the sheer beauty and fragrances would overcome him to such an extent, that he would no longer think of food or drink, sleep or leaving, and would die, without feeling any pain from lack of sleep and sustenance.

The flower garden is the metaphor for paradise. It has been retained for centuries in the awareness of Slovenian people as “god’s little garden” (božji vrtec), and is connected to pilgrimages ”Little Garden”(vrtec) was also the name of a pilgrim dance, evidently a shortening of the God’s Little Garden. Whether an ordinary mortal was allowed to enter the garden after death has not been stated anywhere in the preserved legends and tales. It seems that we cannot exclude this possibility.