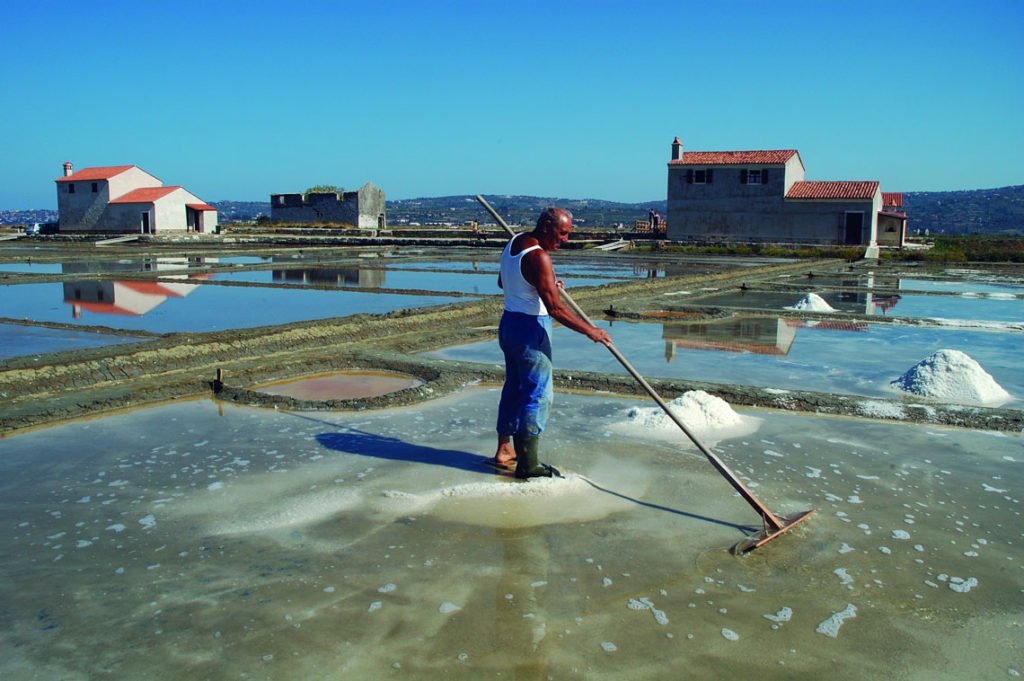 The Sečovlje saltpans (Sečoveljske soline) on the Slovenian Mediterranean coast are today a part of one of the largest coastal marsh wetlands (650 hectares). The wetlands in the estuary of Dragonja River are possibly the most significant Slovenian region, outstanding for its great variety of bird species. So far, 272 bird species have been established in the region, a much greater number than in any one comparable locality of its kind. To date, the area of the salt works and the Seča peninsula have been declared the Sečovlje Salina Landscape Park. Piran is generally regarded as the most beautiful town on the Slovenian Mediterranean coast. It had emerged and flourished mainly due to the salt fields and production of salt, particularly when it was part of the Austro-Hungarian Empire.

The Piran saltpans established in 12th century encompassed the saltpans in the area of today’s marina at Lucija and Portorož, the smaller Strunjan saltpans and the larger saltpans of Sečovlje. Here the visitors are now informed about the traditional salt production, which is still carried out today, mainly to preserve the natural and cultural heritage it represents.

Of special interest in the saltpans area are the simple salt-makers’ dwellings. They are modest grey stone-houses, occupied in the past by the salt-harvesters and their families during the harvesting season (April to September). They comprise a large downstairs storage area, and living quarters upstairs, with two bedrooms and a kitchen and living area, with windows and doors on both sides so that changes in weather could be carefully observed. Today they remain standing, a monument to a bygone era of human activity, providing livelihood for as many as 500 families in its heyday, at the beginning of the 20th century.

The saltpans are supplied by seawater funnelled along several large channels before settling in dammed basins lined with “petola”(artificially grown crust consisting of algae, gypsum and clay), a method used to prevent the salt mixing with sea mud and other sediments. The water is then slowly removed with the aid of large wind-powered pumps, while the remainder evaporates in the sun as the salt crystallizes.  After being drained and washed the salt would in the old days be carted off to large warehouses placed along the coast. One of these is still on view in Portorož. In its heyday, during the first half of the previous century, 40,000 tonnes of salt were produced annually in the area.

The Museum of Salt-Making in Sečovlje received the Europa Nostra Prize, bestowed by European Union to outstanding initiatives for the preservation of cultural heritage in 2003. The salt still produced at the salt works, 2,000 tonnes annually, is marketed as Piran salt, Piranska sol in Slovenian, and has received Protected designation of origin status in the EU. The Museum of Salt-Making has also been pronounced a cultural monument of national importance. The prestigious, exclusive fleur de sel (flower of salt) is still produced today using age-old methods.

In 1993, the Salina became the first Slovenian wetland to be inscribed on the list of internationally important marshes under the auspices of the Ramsar Convention. The Salina is extremely important as an extraordinary assortment of ecosystems incorporating transition forms between the seawater, brackish fresh water and land ecosystems.

Sečovlje Salina Landscape Park is a wonderful place to visit, where human endeavour, livelihood and diversity of natural environment combine to offer a unique experience to the visitor.