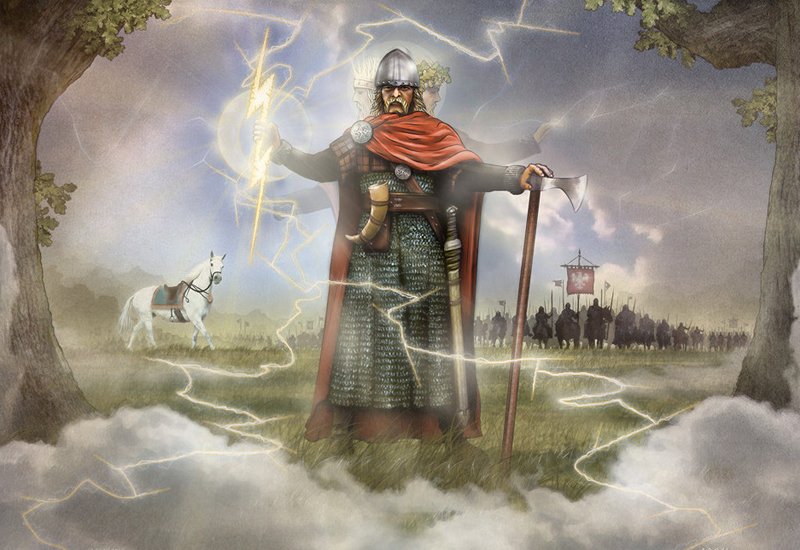 Slovenian god of the visible world

The worship of Svetovid or Svantevid has been established among the Baltic Slavs, Rugians and Pomeranians, and the Carantanians in the Alpine region. We encounter him in Middle Europe, and nowhere else.

He was worshipped as Svantevid by the Baltic Slavs – the Rugians and Pomeranians, from the region that was christianized only in the 12th century. He was their highest god, the lord of the visible world. In Slovenian the word means all-seeing one, the root word vid meaning sight.

His temples among the Rugians were preserved long enough to be recorded by the chroniclers, who report on deities of Pomeranians, or Pomaranian Rugians. The chronicler Hemold (c. *1120 – + 1170) mentions Svetovid in his Chronica Slavorum (I, 52) as Zuantevith, and says about him: “Among many deities of ancient Slavs, Svetovit stands out. He is god of the land of Rugians, effective in fulfilling requests, while other deities are seen as no more than demigods.”

The chronicler Saxo Grammaticus, also describes him as the highest god of Rugians. He was god of good harvest, especially the grain harvest. With a good harvest he ensured prosperity for the people. This was represented by the horn of  plenty held in his left hand. His sword indicates, that he was also the god of justice, indicating punishment and protection. The bow held in his right hand indicates that he is also the god of love. The bow does signify war, but is a sign of the god of love when placed in hand of deities, just like the arrow in the hands of Apollo, Artemis and several other deities.

He was a four faced deity, the defender from the forces of evil. One view has it, that four faces represent four seasons. This claim is however contradictory since the god is connected with the summer harvest.

There is less evidence of his worship by Carantanians, the Slavs of the Alpine region. and what there is, is indirect, since the Christianization process began much earlier in this region,  but the pointers are compelling.

There are general indications that among Carantanians pagan gods were adapted and absorbed into the christian system of beliefs, and so remained close to the way the local people experienced life and nature that gave them sustenance.

There are signs that worship of Svetovid, the all-seeing god and god of harvest, was preserved among Carantanians in the figure of  St. Vid or Št. Vid / St. Vitus, an exceptionally popular saint in Slovenian lands. There is first of all the evidence of the name. It would be reasonable to assume that the old pagan Svetovid merged with the saint Vid. This is supported by the popularity of the saint in Slovenian territories. Many churches are dedicated to him, and many place names as well. In addition,  the prevailing opinion among Slovenian ethnologists is that churches tended to be built in places where pagan temples had stood.

It is a characteristic of Slovenes and Croatians that they pray to Sveti Vid  in cases of eye disease. The explanation might lie in the meaning of the word – “vid”, which means sight in Slovenian. Thus the word vid and the name of the saint – Vid are identical. Further, the word vid is also part of the name Svetovid. So it is reasonable to suppose that prayers for good sight were also directed to the pagan predecessor of St. Vid. In some places, particularly Bela Krajina in south-eastern Slovenia, the custom was to gather dew before sunrise. It was collected with a piece of cloth, the moisture was then squeezed out and used as eye medicine.

Niko Kuret, eminent Slovenian ethnologist believes that christian missionaries had successfully replaced the old Svetovid with the Christian Saint Vid. According to the old Julian calendar they celebrated his name day on the day of summer solstice, the 24th June, when the bonfires are lit. From 1582 onwards, in accordance to the new Gregorian calendar, it is celebrated a few days earlier, on the 15th June. Just how remarkable must have been the so-called Vidovo or St. Vid Day festival testify, says the ethnologist, the remnants of old customs, still maintaining their hold on the great feast days.