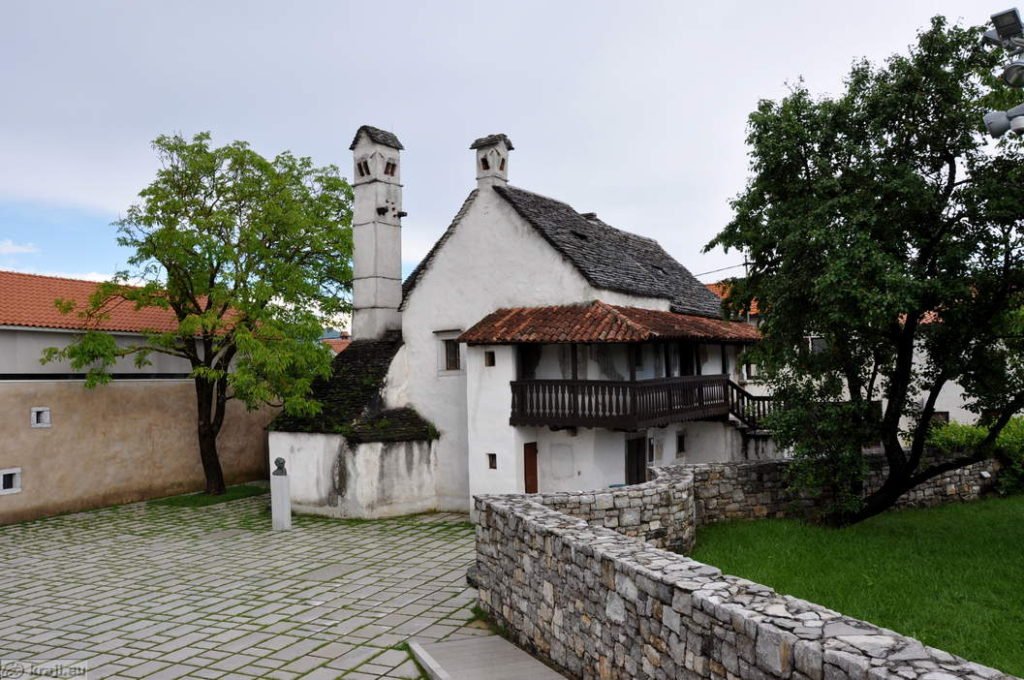 The Škratelj House in Divača was built in the 17th century and remained the biggest and most important house till the early 20th century. It had been an important overnight stopover hostelry, serving carters and their escorts with their wagon trains and transport animals and all kinds of traffic until the construction of the railroad between Vienna and Trieste (1857) and then Istria (1876).

The exterior of the house retained its significance well beyond the time when it ceased to operate as a hostelry. The interior however deteriorated rapidly and went into the final decline before the beginning of World War I. The farming Škratelj family moved away during the period between two world wars. In the house remained the farmer’s second wife Katra, who died soon after the end of the second world war.

During the next decades the homestead declined further. It was due to Slovenian and Italian photographers that the architectural profession and the authorities came to realize its value as a cultural heritage building.

Today the Škratelj House is an acclaimed ethnological monument of Slovenia. The architect Nataša Šumi drew plans, solving in a witty way a whole lot of sculptural and structural problems. Committed builders restored the residential building, but the outbuildings are still awaiting a more thorough reconstruction.
The Škratelj homestead comprised till the 20th century the farmhouse and outbuildings. These consisted of the elegant stone-built farmhouse, a spacious stable, accommodating numerous draught animals, the hayloft, the pigsty, wine cellar for storage of beverages and serving drinks, and large barn for transport vehicles and carriages. There was also a belly-shaped well with a stone paw, collecting water from the stone slatted roof.  Kolona, a large semi-circular and segmentally composed stone portal was added In the beginning of 19th century.

Like the majority of houses in Karst the Škratelj House grew in stages, over several centuries. It acquired its present appearance after much rebuilding and additions over the period from the 17th to the middle of 19th century. The nucleus of the house reaches into the 17th century, indicated by the small windows of the ground floor and to some extent the building technique. In the 18th century the house acquired the monumental fireplace and chimney, in the following century the owner added small columns and an extension on the external stone staircase. A wooden balcony (ganjk) was added with small columns and a canopy roof. At the same time extensions were constructed at the north-western façade and the kitchen extension (spahnjenca) with a picturesque chimney. About that time the beautiful courtyard portal was added, a few windows were reconstructed and the portal on the ground floor, next to the stairway appeared.
The interior of the house was partly vaulted, the walls designed to delight the modern day sculptor. The beautifully formed window frames, portals and supports lack any ornamentation, appearing as pure stone masonry detail. There is emphasis on the balcony (ganjk) and the courtyard portal. We experience the Škratelj house as a puritan architecture with some light emphases.

With unfinished restoration, the Škratelj House has been for a period of time saved as architecture, and not, as it was intended, as a monument of cultural heritage, recording the function the homestead has had in its past. For the present the cultural content is given by the naïve artist Frank Viktor, who has established a sculpture atelier on the ground floor, exhibiting since 1980 a rich collection of his works. His sculptures, some lifesize, are mostly shaped from linden wood, sometimes also from Karst and  Brkini stone. Among the best known creations, and sculptor’s favourite, is the composition with the title From the cradle to 100 years, presenting the human life from birth to childhood, youth, over the peak of life to old age and death.

Škratelj House in Divača has become known as the birthplace of the first Slovenian film star Ita Rina.  She was born here on 7th July 1907 as Ida Kravanja. The family moved to Ljubljana after the end of the 1st World War, where Ida completed her schooling. Just before her 20th birthday Ida ran from home. She went to Berlin – the Mecca of the European film of the time. Playing lesser roles, she succeeded to take part in a number of films, till she was noticed by the young and talented Czech film director Gustav Machaty. He offered her the main role in the film Erotikon. From this point on, her career took off. And she became very popular in her home state of Yugoslavia. Till the World War 2 she played several roles in German and co-production films, after the war she completed her last film in 1960 with the name War – under the director Veljko Bulajič‡. She died in 1979 in Belgrade.

In the restored upper storey rooms of the Škratelj House Slovenian Kinoteque established a permanent exhibition of photos and a range of articles from life and works of Ita Rina. Film producers are endeavouring to make the Škratelj House a museum for Slovenian film actors.