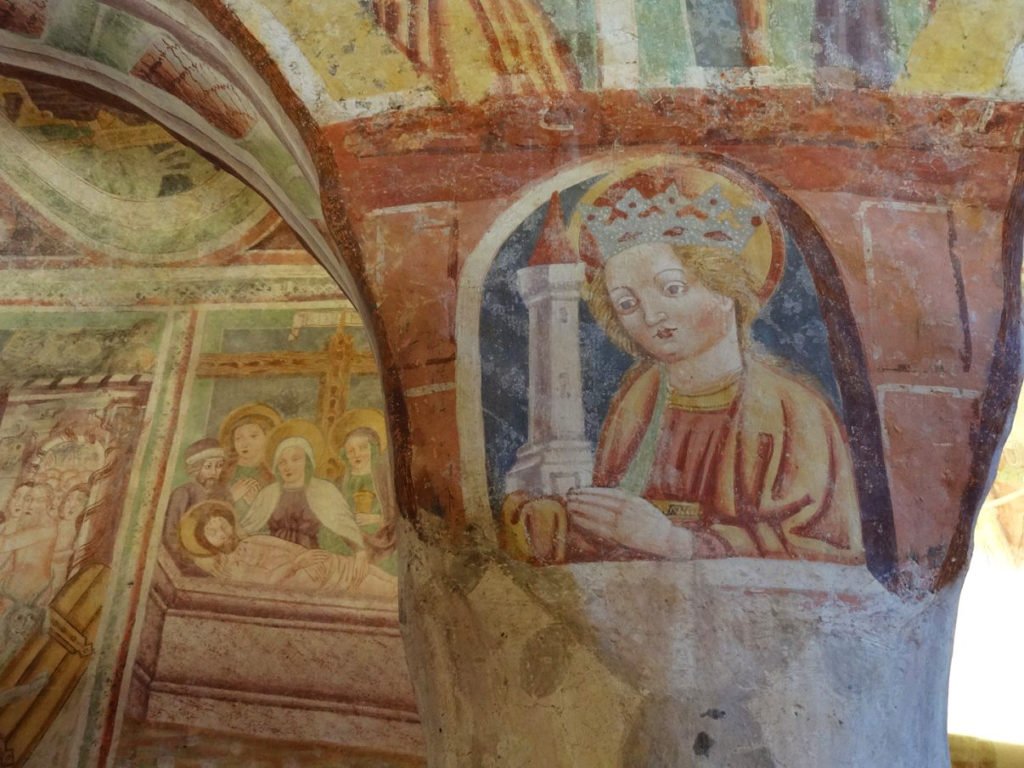 The Slovenian sculptor Marko Pogačnik has added a new viewpoint to the significance of Hrastovlje frescoes. A renowned earth healer and inventor of earth healing process that he named lythopuncture and nature mystic in touch with the energies that flow beyond the visible nature, Marko Pogačnik is also an author published in Slovenian, English and German. His books deal with earth healing process and new consciousness of the earth and our planet.

In the frescoes of Hrastovlje he discovered the representation of an ancient pre-Christian religion of the Goddess, which existed in a matriarchal world order, later to be displaced by the patriarchal.

In his book the The return of the Goddess he describes the search and the new awareness he had gained on the way. It is his belief that mankind suppressed the female principle and in consequence lost the connection with nature. With the loss of the Goddess we have also lost the proper feeling and respect for nature. The exploitation of land, pollution of environment and all the evils deriving from those, stem from that initial loss.

In his search for the old religion of the earth, the nature mystic discovered the concept of the threefold Goddess – represented by the girl/virgin, the fruitful woman/mother and the old crone of death and renewal. In the church of St.Trinity at Hrastovlje he saw that concept embodied in the figures of Virgin Mary, Mother Eve and the skeleton of Death Dance. This is how he describes it.

On the north wall of the side aisle is a representation of the Magi bearing gifts. The pageant is moving from the west towards east, towards the rising sun. There sits the Virgin Mary on a golden throne with the child Jesus on her lap. She is enveloped in white mantle with a jeweled border and is wearing a golden crown. In contrast, the usual representation of Jesus’ birth is a modest stable, with Mary and Joseph kneeling to the godchild. The two animals painted in the background of the Hrastovlje fresco serve as a kind of reminder that the Queen of Heaven is also the Goddess of the earthly sphere. The indications are unmistakable, that this is the archetypal White Goddess or Virgin Goddess, who represents the wholeness of the cosmos, integrating the spiritual and material spheres. In Hrastovlje she sits in the east, and so represents the rising sun, a symbol of the new beginning. The magic bloom decorating her throne connects her with the archetype of the Goddess of Flowers. The sunrise and springtime are symbols of rebirth. The Goddess of the Cosmic Completeness has also given birth to the male principle, symbolized by the godchild on her lap.

In the middle arch of the nave we see the figure of Mother Eve, bursting with life-giving energy. She sits in the centre of her home, suckling two infants and spinning. In this way Eve of Hrastovlje represents various aspects of the Goddess. She is the Goddess of Abundance of Life. Seated in the centre of her home, she symbolizes the axis, around which are placed all possible dimensions of creation – the axis of the world. As the suckling mother, she embodies the source of unlimited fertility and plenty. Spinning the thread and turning the spindle, she shares with all manifested beings their fate, while she guides them through life, death and birth.

Eve of Hrastovlje manifests another significant aspect of the Goddess of Abundance of Life. We see her with Adam, as he works the land. Active yang of Adam, balanced by still, central yin of Eve, signifies male-female polarization of forces, characteristic of the red or creative phase of the threefold Goddess. Creativity originates from the tension between female and male forces within a defined being. The image of Adam and Eve is painted in the middle of the central arch, which corresponds to the position of the sun at its zenith.

On the south wall of the side aisle there is a representation of Death Dance. The pageant of living humanity and the dead contains eleven skeletons, moving from east to west, in the direction of the setting sun. There, at the end of the line sits a skeleton, in a desolate and bleak winter landscape, on a crude stone throne. As the Goddess of Death and Transformation, the skeleton holds a gravestone tablet over an open grave, as if to invite the humans to proceed on the path to the grave. The Goddess of Death and Transformation rules over the winter, when life withdraws into its phase of decay and renewal. In the church of Hrastovlje the procession of the dead is beckoning mankind into the depth of the grave, that is, onto the fearsome path through the underworld – to submit to the process of transformation, which will lead through death into a renewed beginning.

The hidden threefold Goddess flows in Hrastovlje from the springtime sun of Virgin Mary, past the summer sun of Mother Eve, back to the winter sun of the Goddess of Transformation.