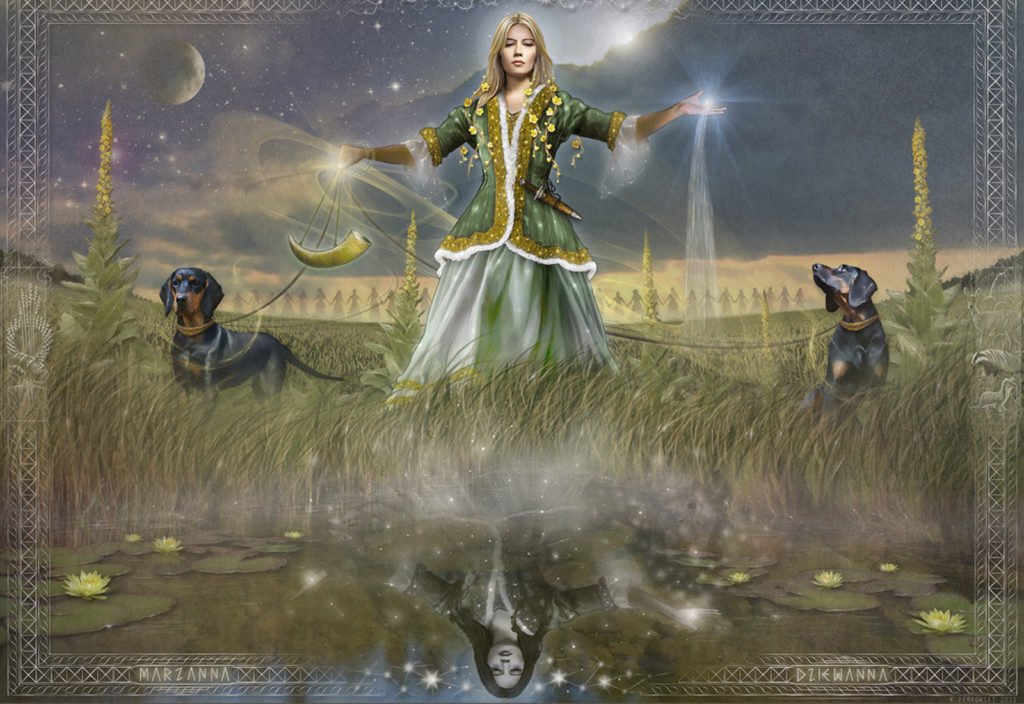 The ancient Maya, goddess of nature, greenery and flowers gave its name to the month May. Its visible symbol is maypole (orig. Sl. mlaj), also called may or maya, which is the focal point of all first of May festivities. People who celebrate the first of May, no longer know what the maypole represented. Yet this ancient symbolism of folk customs on the first of May still clearly manifest.

Contrary to the view which prevailed, that the may-pole represented the masculine principle, the symbolism is feminine. In Kanalska valley, and other places, they call the maypole Maya, a feminine name, which is evidently original. A pine or fir tree is commonly used for the maypole, evidently because the pine tree is an evergreen, and therefore the metaphor of immortality.

The first of May is an ancient pagan feast, celebrated by Carantanians. A beautiful ancient custom today still testifies to this. On the edge of many villages they erect a maypole (orig. Sl. mlaj), which also signifies a new moon. This does not take place only on Slovenian territory, but also elsewhere in middle Europe, in Slavic and German speaking regions. Since middle Europe was in the antiquity before the Celts, the homeland of Slovenian ancestors, Slavic speaking Veneti, we may surmise that the erection of mlaj is their heritage.

The concept of spring was not the same in the Roman world as in middle Europe and later in Carantania. Here was the feast of spring, victory over winter and cold. In the Mediterranean on the other hand, spring was a time of lush May blossoming. Because of this the figure of Flora, Roman goddess of flowers does not relate to Vesna, Slavic and Carantanian goddess of spring, who proclaimed the awakening of nature with the first modest flowers.

The folk festival of the first of May, which is with the exception of the Mediterranean regions, characteristic for all Europe, stems from pre-Roman times, and is evidently heritage of the ancestors of present day Slovenes – Veneti.

The essence of the celebration of first of May was once the re-awakening of nature in the lush greenery of May. This could not be embodied by a male, but only by a female deity, that is some way related to the month of May. Lush greenery of May heralded a rich harvest, which ensured the survival of the people.

Maya and Kresnik represented nature and life to our Caranthanian ancestors. From the elements contained by the customs of the first of May, we can deduce, that pagan Slovenes once worshipped Maya, who was probably more mother nature to them, than goddess. Kresnik, the fire god, representing the warmth of the sun, was her spouse.

In Indian belief the Maya, goddess of nature has a prominent place. Her figure, and what it represented, had by far transcended the mere embodiment of nature and growth. Hindus and Buddhists worship Maya as “mother of creation” and as ”spinner of the thread of life”. In the central deity Kali, the threefold goddess – maiden, mother and old woman, the maiden is identified with Maya, who embodies intelligence, energy, magic, creativity.

It is certain, that Maya in her origin is not Greek or Roman goddess. She belongs in Middle Europe, not only to the Veneti, but also to Celts and Romans. In the whole of Middle Europe, including the British Isles and Scandinavia they celebrate 1st May with great processions. In processions the central figure is the “queen of May”. She is dressed in white, on her head she wears a wreath of flowers, in some places even a crown.

In ancient Celtic lands like Ireland and Scotland, Wales, Cornwall and Britain the first day of May is called “beltane”. It is an ancient Irish word, which means bright fire or light of fire, a fire that can be seen far away, similarly to “kres” in Slovenian. This day proclaims the summertime and with it hope for a good harvest, plenty, and a pleasant life.

In Slovenia with the festivities around raising a maypole in praise of the bountiful nature, that is so lush in the month of May in countries where there are distinct four seasons. There seems to be no doubt that Maya was the great mother to Caranthanians, and they kept that concept alive through customs, particularly by raising the may pole and all the festivities surrounding it.

The goddess Maja worship was transposed to the worship to Mary, Queen of Heaven and Mother of God. The testimony of this enduring worship is a special liturgy, composed of litany in praise of Mary and songs which are also a praise of the month of May – songs of the blossoming, lush, joyful month of May, which has become Mary’s month. The daily liturgy is called “šmarnice” (Slovenian word for lilies-of-the-valley).