The name Kresnik is reflected in the word “kres” (bonfire), that derives from the word “iskra” (spark). The original meaning of all these names is ultimately fire, symbolic representation of the Sun. 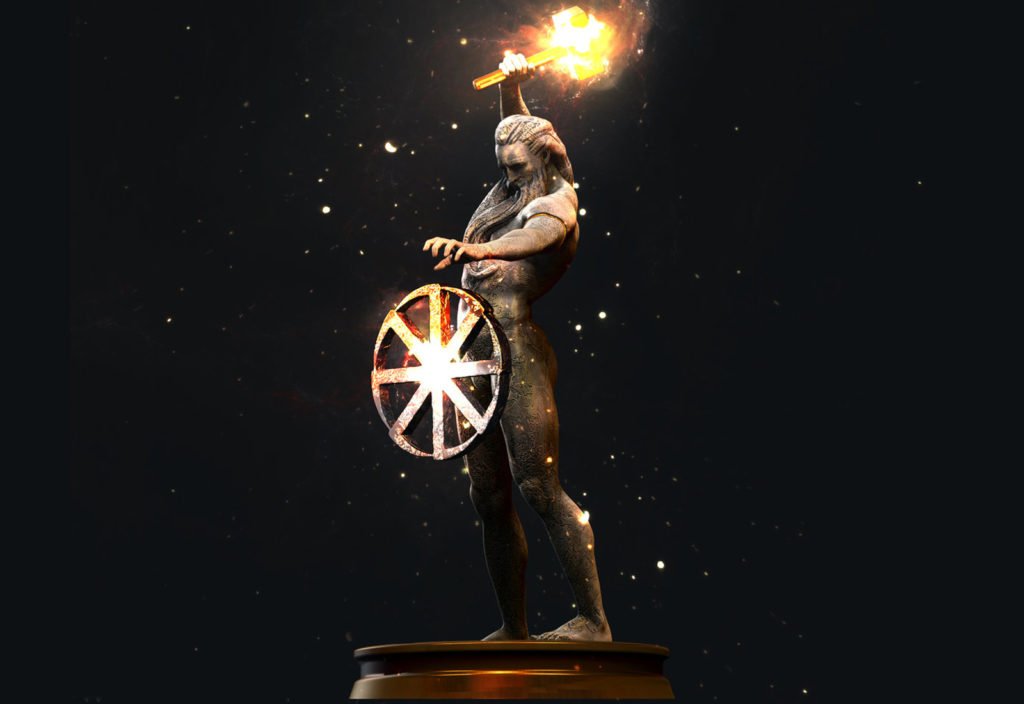 The figure of Kresnik appears in a variety of guises in Slovenian folklore. Slovenian myths about Kresnik are preserved only in abbreviated narratives, often in unrelated excerpts. They are not always clear or comprehensible. Their symbolism is complex, and it is not always easy to determine what is sacred and what is magic.

In the name Kresnik is reflected the word kres, that derives from “iskra” (spark). The origins of all these names however is ultimately fire, which symbolizes the sun. He may be identified with the god Fetonte, the glittering or sparkling god.

Krsnik’s visible symbol was the bonfire, “kres” in Slovenian, which has been retained in folk tradition to this day. Not only in the region of ancient Noricum, later Carantania, but across Middle and Northern Europe, on the territory of ancient Veneti, where they light bonfires on the eve of the first of May. It is probable that the custom was also adopted by the Celtic western Europe from the Veneti. In the Land of Franks, east of the city Grailsheim in Germany, rises the hill Kresberg (528m), which by its name points to the “kresovanje”/lighting of bonfires. The custom is still alive today in Bavaria, Tyrol, Austria/Carantania.

We may surmise that the custom was preserved in the folk tradition from pre-history till the present day. We may also speculate that in the whole of this territory, on Šentjanževo (St. John the Baptist on 24 June), Kresnik god of summer sun and fire, who made possible a plentiful harvest of hay, wheat and fruit, was worshipped with the lighting of bonfires.

Kresnik tradition has given rise to a rich folklore of myths and tales, which appear to belong and older and a younger cycle. In the older cycle Kresnik appears as son of a sky deity. We suspect that he is the son of Belin, although he is not referred to by name. Kresnik is god, since he has golden hair and golden hands and lives on a golden mountain (axis mundi), somewhere in the morning land, in the east where he has his castle. Opposite his castle is a garden, in it is an apple tree, which has golden apples, the fruit of immortality. Whoever is so fortunate that he reaches the mountain and picks the golden apple, never dies. Golden apples are a symbol of love, fruitfulness and life. Kresnik’s garden is a metaphor for paradise. In these myths the greatest enemy of Kresnik is Vidovina, a malevolent spirit, and a magician. Kresnik protects people from him.

His fame is based on twelve principal deeds, which benefit mankind. The number of signs corresponds to the number of heavenly signs, which the sun passes on its annual journey.

In a younger cycle Kresnik appears in legends as the mythical Slovenian prince (orig. Sl. knez). In the castle lives the beautiful princess Vesina/Vesna. Once when Kresnik was away from home, a great serpent came, coiled around the castle, and almost captured it. However on “Jurjevo”, the first day of spring, Kresnik returned, fought the serpent, defeated him and chained him. Then golden wheat fell to earth. Kresnik married Vesna and lived with her happily. In this myth Kresnik took the place of god Vesnik / Jarnik, god of the spring sun, who is in reality the bridegroom of Vesna, goddess of spring. The defeated serpent is the representation of the defeated winter. Victory over winter in turn brings the harvest, golden wheat bread, that was for Carantanians god’s gift. One of the myths says: In legends he appears as hero, fighting dragons and serpents.

In Kresnik myths other mythical figures appear, the serpent, the bull, the goat. Much more than in legend Kresnik is reflected in folk customs, that contain pre-christian elements. Thus Kresnik had two feast days in the ancient Carantanian tradition. The first one on 25 December, the birth date of Kresnik, the second a few days after summer solstice, the Feast of Bonfires (orig. Sl. Kresna noč).

The first is the christian feast of Christ’s birth, Christmas which Slovenes call Božič meaning child god. The second is the name-day of St. John the Baptist. In Slovenian the word Baptist translates as Krstnik, which is heterographic, that is similar in sound to Kresnik. Consequently the figures of the saint and god of fire are linked in the folk tradition.