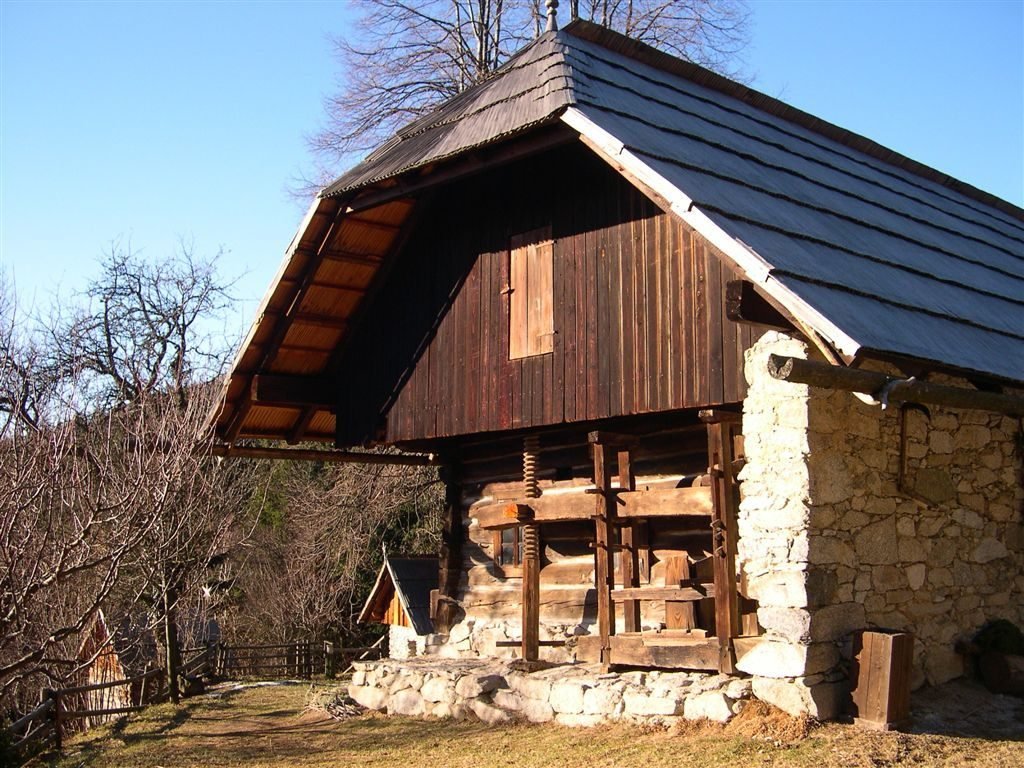 The Kavčnik homestead with its central part named “dimnica” (smokehouse) takes us back some 400 years. The age of the old building is indicated by small windows of the smokehouse, sliding mechanism for closing windows, and details of wooden hinges in the entrance doorway to the shack. Initially the smokehouse cell was the only living space of the Kavčnik homestead, apart from the small entrance.

The total life of the farm did therefore take its course within the smokehouse. In this room we meet the history and life-style, that reaches far back through the past centuries, and which ended only a decade ago, when the last owner of the house passed away. In the smokehouse space the family slept, cooked, ate and worked, at night they were joined by the poultry, some dozen cats curled up, dozing by the warm fireplace. The centre-point of the smokehouse was the fireplace and oven. By the fireplace were iron pots and earthenware, vessels and pots with a variety of kitchenware and spices. The fireplace and the oven were in the sole charge of “gospodinja” (the mistress). On the opposite side was the working corner – “ponk” of “gospodar”(the master), with a multitude of tools for shoemaking, carpentry, joinery and wheelwright trade. This means, that they could make everything at home, possibly not beautifully or completely finished, but serviceable and often imaginative. Beside the workbench, there was the bed, covered with linen sheets woven at home from flax, and part of the mother’s dowry.
These kinds of buildings – smokehouses, were predominant in the Slovenian space from 11th to 18th century, then the authorities began decisively to regulate building, because of danger of fire. Houses often burnt down in those times and this particular building model was regarded as unsafe. They began to replace them with contemporary house plans, with the so-called “črna kuhinja” (black kitchen). Kavčnik smokehouse has been regarded till now as the southernmost preserved example of “dimnica” in the European Alpine region. It was turned into a museum in 1986 and became the responsibility of Velenje Museum.
About 250 years ago, they added “bela hiša” (white house) to the smokehouse, white because it was painted with lime on the outside, and therefore white. By now the whiteness has yellowed, so that you can see the beams and gaps between them, closed with lime and moss. This added space is connected with the smokehouse, which was relieved from its multifunctionality. Into the new space was put a table with benches along the outside walls and a few chairs. In the corner diagonally opposite is the oven, which is actually an extension of the fireplace from the smokehouse.
The foundations of the older and more recent part of the building are rocks of various size, so-called “rženjak”. This is volcanic stone from the nearby mountain Smrekovec, known to have been an active volcano in the past. In the stonewalled cellar underneath the house they kept pigs, more recently goats and sheep, Kavčnik homestead was covered with shingles (škodla), which was common for the houses high in the hills. In the valley, where wheat was grown, the houses were covered with straw.
In more recent times there was another addition to the smokehouse and white house. A cellar and stable was built on the opposite end, with a wooden barn on top. Today the cellar is used for various purposes, for example courses organized by University for the third period of life (mature age students). Part of the barn is used for storing farm tools and machinery. Here the visitors can view a short film about the Kavčnik homestead. The second part of the barn is arranged as temporary exhibition space with posters, brochures and other materials, including mementos on sale.
In conclusion it must be pointed out, that Kavčnik homestead represents the home of a modest, poor farmer high in the mountains (over 700 m). Such was also the first known owner of the homestead Matevž Počen, who had in 1827 altogether 3 hectares of land, which was insufficient for survival of an average size family, and much less a large one. He had to look for work in larger farms in the neighbourhood. This is the main reason why the homestead could not follow the changes in rural building, and was preserved as it was more than 200 years ago. Apart from this, the homestead is located in the middle of the forest, at a distance from other homesteads. Today, access is much easier, an asphalt road leads the visitor almost to its door.