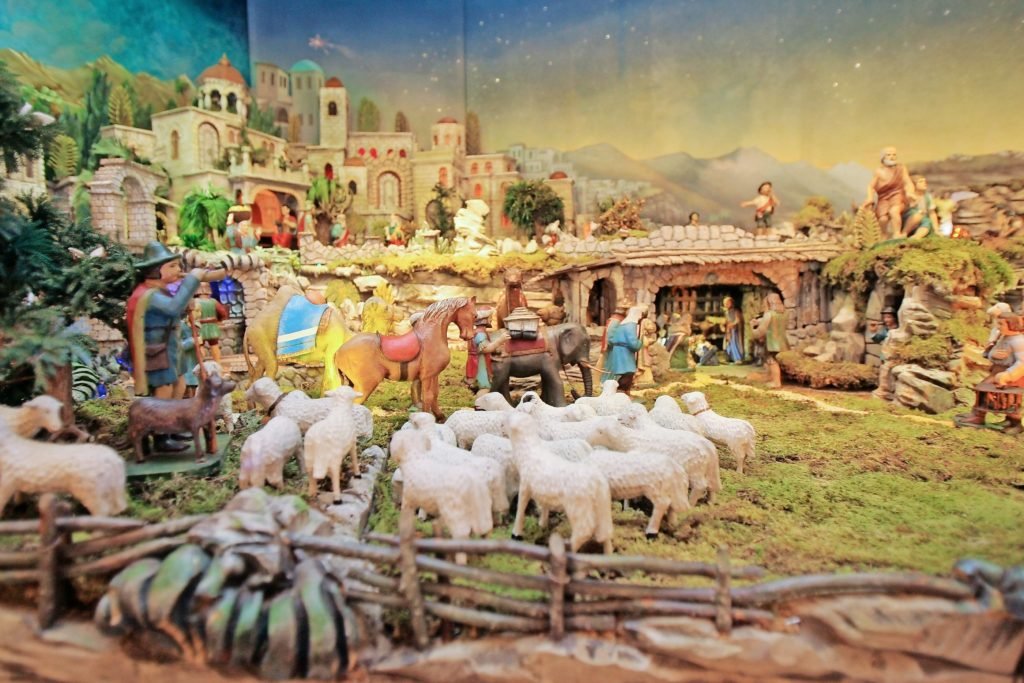 Christ’s birthday is celebrated in the Catholic Europe, and particularly in Central and Western Europe by a stage setting of the place of Christ’s birth – a crib with the newly born child, surrounded by Mary and Joseph, the adoring shepherds and their flocks, and later joined by the three wise men.

St. Francis of Assisi is thought to be the first to create a Christmas manger in a cave in the year 1223. However the tradition of Christmas manger seems to have its beginnings in the 16th century. The Jesuits intended to employ it in their pastoral work, just as they had already introduced the Holy Sepulchre at Easter.

The tradition spread. The church manger, usually work of great masters, was initially placed in a side chapel and remained there throughout the year. According to some evidence the first Jesuit mangers – portable, smaller and used only during the Christmas season, were set up in 1560 in Coimbra, Portugal. Two years later the manger appeared in Prague. During the 16th century Jesuits introduced it in Japan, India, America and in Europe, particularly north of the Alps, where the placing of an infant in a cradle was an established custom.

In 17th century Italy the Christmas manger was set up increasingly in private households and the wealthy townspeople began to compete with each other for a greater and more elaborate display of setting and figurines.

In Slovenian lands the tradition spread from church representation of Jesus’ birth and adoration of the magi on frescoes from 1240, to 14th, 15th and 16th centuries (in Vrzdenc, Crngrob, sv. Primož near Kamnik and elsewhere); from the beginning of the 16th century paintings and reliefs appeared on side altars (Selo and Grad in Prekmurje, Ptuj, etc.). They are evidence of the adoration of the Holy Child in the Slovenian space. Such adoration is also exhibited in statues of the Holy Child in monasteries such as the Christmas cradle in the Clarisse Monastery in Mekinje in the 17th century, as well as in many churches. Christmas church celebrations originated from this period, with enactments and singing that later led to the Christmas mangers as we know them today: movable figures representing the Christmas event aimed at a deepening experience of Christmas mystery, either in church or within the family.

From the records we know that Jesuits brought the manger to Slovenian lands in 1644, first to Ljubljana. It began to make its appearance in churches after 1700. Many churches did not exhibit the manger till much later, and in some cases it was a simple representation of the Holy Child.

In time the manger spread from the churches and monasteries to the castles and towns, to the countryside and finally to the family home. It was established in the towns from about 1700 onwards. In another hundred years they were common in the country, first in the Upper Carniola, Lower Carniola and Lower Styria. After 1850 they began to enter the households in Bela Krajina and Eastern Styria, around 1900 to the Littoral and Gorizia. They were mostly set up as “bogkov kot” (little god’s corner), and were initially made of paper, either bought or fashioned at home, later figurines were carved from wood and later still they were ceramic. Some were elaborate, with shepherds and their flocks on a landscape constructed with moss gathered in the forest by the children. The day before the Christmas Eve would be spent creating the manger and decorating the Christmas tree.

In the 19th century the mangers were popular across Europe. The 20th century produced many creators of mangers for church and home, both as simple folk versions and the more sophisticated versions. After a lull following during the second half of the 20th century, interest in the mangers has revived in recent times. There are manger exhibitions, collections, and workshops.