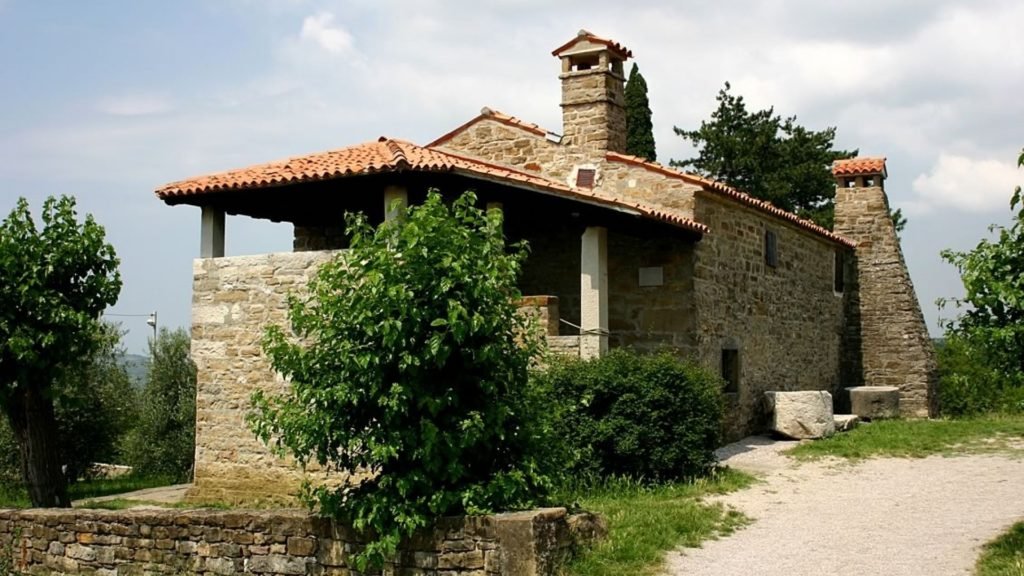 In the time, when the attention of the majority of inlanders turns towards the sea, it is right that we also turn towards Primorska, or more exactly Tona’s house in St.Peter in the county Piran. The house in question is a beautiful example of Istrian rural architecture and as such differs in almost all the elements from the rural architecture of the other parts of Slovenia.
Some 500 years old building, topcellared, roofed with double-eaves is built of stone. Preserved stone stairway ends in a “baladur”, a covered terrace before the entrance into the living area. On the north-eastern facade you can see the chimney extension, which was once used for the oil-making. The exterior of the building is finished off with simply shaped stonecutter details on windows and entrances, and roofing “kritina” made of characteristic local rounded tiles, named “korci” The interior of the house has also been preserved in its entirety. Before the upgrade the ground floor space was used to store field produce, in the 19th century it was converted into the oil mill.
Tona’s house got its name after its last resident, the well-to-do farm owner, Mrs. Antonija Goreli. After her death the house was empty and neglected, till it was almost on the point of collapse. It was saved just in time by the Institute for Protection of Monuments Piran. The building was completely renovated in 1979. The ethnological collection was placed in the house, with the assistance of the Marine Museum Sergej Mašera Piran and remains there under its supervision to this day.

On the ground floor, a single large space, the oil mill and oil press was installed. According to records, the oil mill, as it is today, was active in the house already in the 19 th century. This type of oil mill was quite common in the area during the past centuries and the first half of the 20 th century. In the process of oil production they used several devices: the mill for crushing olives, the press for compressing the ground olives, the screw for the tightening of the press and oven with the cauldron for heating water. The appointment of these devices was strictly functional and made possible efficient performance of work.
The mill in which they ground olives, was built of stone shaped as a circle. Upper level was shaped as a plate, and was made of several large stone slabs and an in-built concave slab in the middle. Onto the wooden screw they attached the mill stone and pole, so that the stone could be rolled about the plate. The screw with the stone was most often turned by the farm animals (donkey, horse or ox), and sometimes by people, in the mills with smaller mill stones.
Th ground mass was fed into round pleated sacks made of hemp or coconut rope. They laid them on a stone slab under the press screw. They weighted it with wooden blocks, poured boiling water over the lot in began to press. Oil ran into stone jars.
In private oil mills three or four oil men worked with the owner, mostly relatives or villagers, sometimes seasonal workers from other villages, who returned home when the season finished. The work was done during winter, when the olives ripened.

The upper floor of the living areas was divided into two reconstructed rooms, farm kitchen with low mediterrenean fire place and the room. The living area had open roof space, instead of the ceiling. The specialty were the great oak beams, that included tree roots. This is what Istrian homesteads in Slovenian Primorje where like. What the life of the Istrian farmers was like in the past, is told even more clearly by the still growing ethnological collection. This means, that here we don’t have a faithful reproduction of such space in a concrete historical period, but we see above all the objects and furniture, that local people utilized in the past, when the fire-place was still alive. Initially dominated the furniture and appointments made at home, or furniture made by village tradesmen, but in time such articles were replaced by city furniture, and smaller objects, kitchen and table ware bought in shops. Even in the past century useful and decorative textile objects, such as embroidered table-cloths, curtains and bed-spreads were made by women at home.
Ethnological products and tools are kept also in the outhouse, which belongs to Tona’s House in we could say something similar also about the olive trees and mulberry trees surrounding the house, since trees complement the image of the homestead in Istra.
The settlement, where Tona’s house is located, is named Goreli, just like the last owner of the house, that we are discussing. It is in the immediate vicinity of the village St.Peter in the county Piran. It is a good example of local building, which was in the past, more than today, dependent on the use of local materials and in strict harmony with its environment.