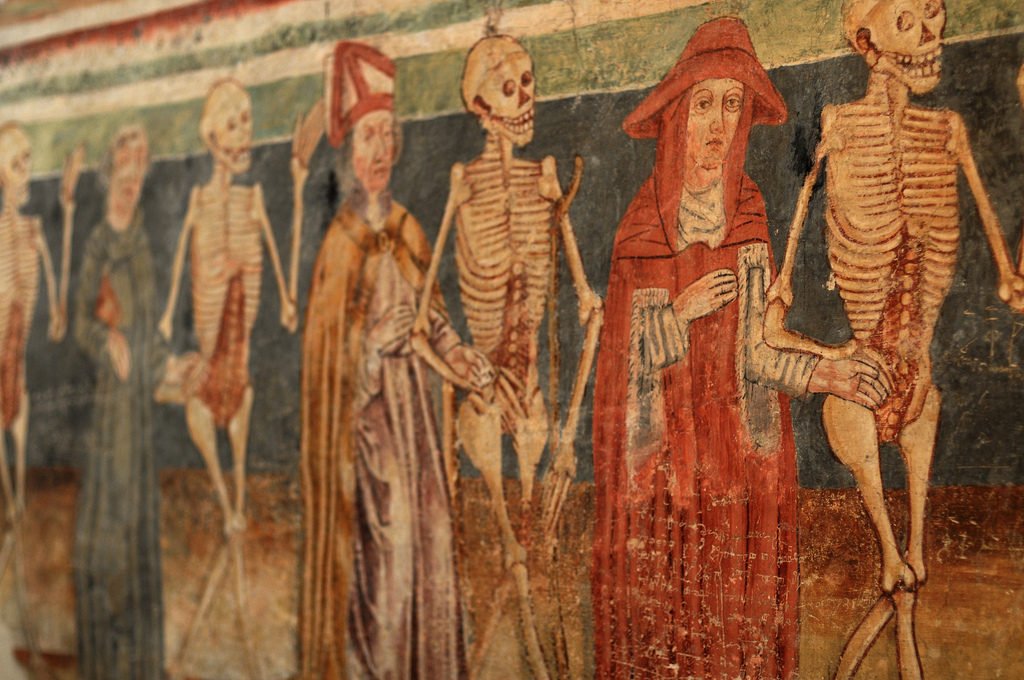 Historically and geographically the Gothic paintings of Hrastovlje are placed in the subalpine belt of middle Europe, one of the most interesting areas towards the end of Middle Ages. The art historian F. Stelè has defined the area precisely as beginning on the Gulf of Genoa, running through Switzerland, Tyrol, Carnia, Furlania, Carinthia, Slovenia and ending in Slovenian Istria as far as the Kvarner Bay (Zadnikar, p.54). In this space and time Hrastovlje frescoes are exceptional. Despite their average artistic quality, they stand out for their iconographic wealth, use of colour, the unique Death Dance, the complete Genesis and the calendar cycle portrayed for the first time anywhere in Slovenia. In the opinion of F. Stelè, the painter of Hrastovlje frescoes achieved a peak of a particular Gothic church painting style – the synthesis of country painting of Istria and Karst regions, Soča Valley and Furlania. This makes the little church of Hrastovlje the representative and the best of Gothic religious decorative art of this region.

The first view of the church interior is just as enchanting as the first glimpse of the Hrastovlje from distance. Step through the doorway and the eye is assailed by a plethora of images and warm, rich colours, every space and surface aglow with familiar images of Christian iconography. There is no part of walls, ceiling and arches that does not tell a story or present an allegorical truth.

The most outstanding painting at Hrastovlje, which raises it above the commonplace among the examples of Gothic church art, is the Death Dance or Danse macabre. Painted along the southern wall, it is among the best preserved paintings of this well-known medieval theme anywhere. A kind of grotesque dance with death, it has remained one of the most powerful and enduring medieval images. Rather rare in medieval Christian iconography, the Dance appeared in the 15th century, painted mainly on cemetery walls and carnel houses. Its origin is not clear. A pictorial reminder of transitoriness of life and all things material, it also demonstrates the principle of justice, completely incorruptible and inescapable for all – young and old, rich and poor, powerful and powerless. The Hrastovlje Dance of Death has a special place among the surviving examples. Not the least because of its excellent preservation and completeness.

The frescoes of Hrastovlje church comprise several complete cycles, exceptional for wealth of imagery. Foremost among these is the cyclical representation of Genesis, beginning with Creation, and ending with killing of Abel, which is rare in its completeness by world standards. There is the cycle of Christ’s Passion in fifteen scenes, Mary’s Annunciation and Coronation, the Journey of Magi and the twelve Apostles ranged in the central apse behind the altar. Other saints are portrayed in their various roles as protectors against disease and disaster. An unusual addition for the Gothic church art is the secular cycle of twelve months, portraying seasonal activities and customs of Istria. It is the only case of a secular cycle in a Gothic church in Slovenia. Two additional months are added to the yearly cycle of twelve. One of these portrays a sitting figure with three faces, possibly representing time (tempus) – past, present and future.

A new and significant viewpoint about the importance of Hrastovlje frescoes has been added by Marko Pogačnik, sculptor, earth healer and nature mystic, in his book The Goddess returns .

In a chance visit to Hrastovlje, expecting to find in this place a focal point of energy lines, he found instead – hidden within the worship of Mary, Mother of God – a clear representation of pre-Christian Goddess worship.

His observations are based on an in-depth knowledge of myth and religion. He found in the figures of Virgin Mary, Eve and the enthroned skeleton of the Death Dance a significance that is based on the disposition of the figures within the church and the path of the sun from east to west. Added to those aspects is the symbolism of appearance, attire and surroundings. He identifies the three figures as the Goddess of Completeness and Creation, Goddess of Life Forces and Plenty and Goddess of Death and Rebirth.

One of the oldest examples of Christian iconography, are two still lives, an embroidered napkin, a gourd, and a clay pitcher with a cup, and a piece of cheese and bread. These two are ranked among the oldest specimens of this kind of painting in Slovenia, for the Middle Ages were not in favour of still life painting, preferring the aspects of the spiritual and supernatural experience.

There is another preserved element of the past at Hrastovlje. Under the frescoes, cut into stonework with a sharp implement are inscriptions records, notes, signs and signatures. Some record a certain event or a mass read on particular day. Others wish to leave permanent sign of their visit. The most interesting ones express a wish, refer to life’s hardship, or make a humorous comment. They would have been written during the 15th and 16th centuries, before the frescoes were painted over. Most of these records and “graffiti” are in Istrian Slovenian dialect; some are in Latin, a few in Italian and one in German, a fairly comparable population mix in this region today. The extraordinary thing is that Slovenian inscriptions are written in the old Glagolitic script (glagolica), introduced to the southern and western Slavs by Byzantine missionaries Constantine and Methodius in the 9th century. Thus the Hrastovlje church is, apart from its pictorial splendour, a unique document of the continuing existence and common usage of the ancient Slavic script among the Slovenian country people into the 17th century, evidence of literacy in their own language.

Slovenian art historians have written a great deal about Hrastovlje. They agree that it is an outstanding and representative monument of Slovenian cultural tradition. There are a number of features which make it exceptional. The church is the only example of the Romanesque architectural style in Slovenia. The well- preserved and complete Gothic frescoes, the glowing colours of the completely painted interior, the wonderful cyclical representations of the Christian tradition; the complete and rare Death Dance; the unique Glagolitic inscriptions; all these make the St.Trinity Church at Hrastovlje a very special place indeed. To the visitor Hrastovlje offers an unforgettable experience, a marvel of a medieval fairy-tale, with all the wealth of myth and imagery, distant past, imagination and humanity in its endless variety. It is an ageless place of simple faith, innocence and dreams. It is a place to be seen and experienced and visited again in its wild and beautiful Istrian countryside.