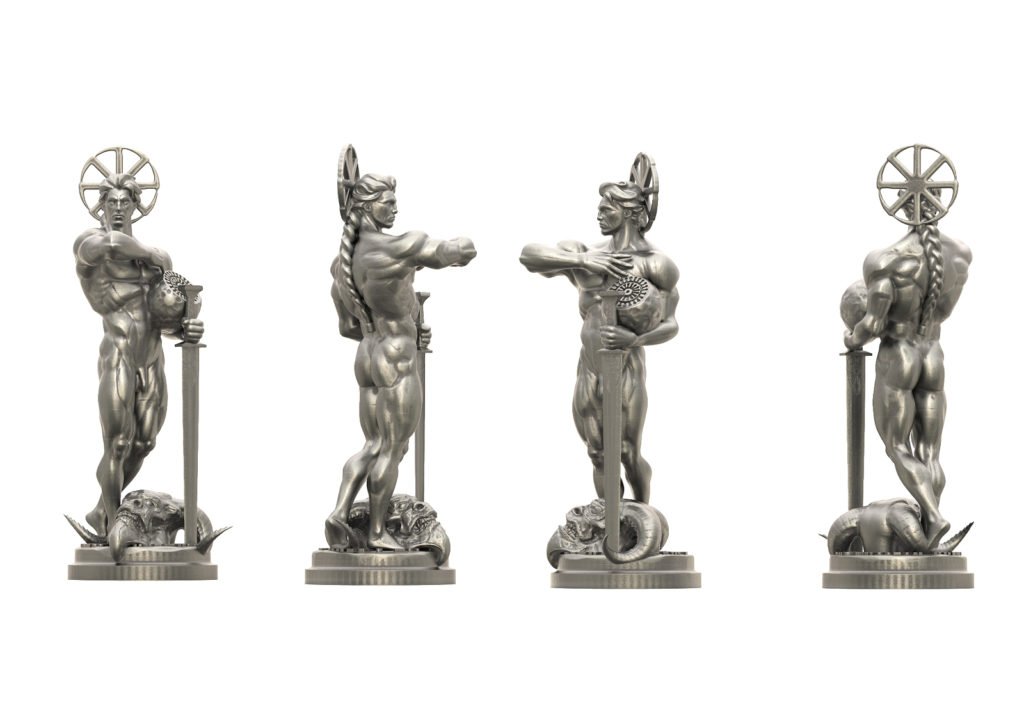 Slovenian god of the shining sky

Belin is an ancient deity. He succeeded the Great Spirit of the Age of Hunters and appeared as the highest god in the Age of Shepherds and Tillers. We come across his manifestation in the role of the god of bright sky and sun among ancient Aryans and Semites. Forms of his name originate from the root word bel and are similar.

Belin appears as pre-Roman god of light and of bright sky. The word “bel“ means white in Slovenian and other Slavic languages, so god Belin is the white or shining god. He is to be found among the gods of the people,  whom the author identifies as Veneti. They inhabited the eastern Alps and north-western Italy, around the city of Venice. Belin is also recorded as the deity of the northern Slavs, – the Pomeranians, Polabians and Lausatians, but under the name Belbog / White god.

There are records of Belin worship during the Roman period, where he appears under the latinized name Belenus, with strong traces of his presence among the Celts. He was the god of Carni, the founders of the city Oglej / Aquilea, which became the second  greatest city of the Roman empire.

His manifestations has been recorded in numerous inscriptions, and temples in the environs of Oglej were dedicated to him. Several inscriptions have been found near Celovec in Carinthia, that were preserved from Roman period. A Roman writer Tertulian (c.160-254) also reports about his worship, referring to Belin as Noricus Belenus. Among the northern Veneti, the Polabians, Pomeranians and Lausatians, he was known as Belbog / White god. In the Tolmin region on the western border of present day Slovenia his worship had survived till after World War II. People imagined him as a heavenly healer, who returns sight to the blind with his key.

Like all the deities of sun and sky Belin had a spouse, the goddess Zemlja / Earth, who in some cases became a mother of a particular land and its people. She was named accordingly, Noreia in Noricum, Reitia in Retia, Histria in Istria, etc., and so represented the people and their state.

In the mythologies of all nations the twosome also had a son. He was a sun god and exemplified self-renewal of life on earth. In the old Slovenian myths he appears under the name Kresnik / Fire god. He appears as sun hero, and can only be the son of Earth and Belin, god of light, sky and sun.

The tradition of Belin was preserved in the Tolmin region till several years after the end of World War II. People imagined him as a kind heavenly healer, who returned sight to the blind with his key. The figure of Belin was preserved from the time of Roman presence, his origin however is pre-Roman, according to research. – People  call him “holy”… Belin is a well-known sun god of Carni and guardian of the city of Oglej / Aquiliea, Belenus, who had several temples in the old Oglej.

Together with other peoples of the eastern Alps: Tavni, Noricans and Latobiki, Carni in pre-Roman times had established a federation reign, regnum Noricum (after 2000 BC). They were settled in the region, which covered the present day Koroška and Furlania, as far as Trst (Trieste). They also established the city of Oglej (orig. Rom. Aquilea).  According to historical records their highest god was Belin. Worship of Belin spread from Noricum, but it orignated in the east…

This is only partly true, since sun and moon were worshipped as deities everywhere, not only in the east. So it can be concluded that their worship, which also has connection to the east, originates in the darkest, that is the least known times, the other side of historical records  Belenus, Belen and Belin are forms of the same name. Their basis is undoubtedly bel ( Eng. white), since it refers to the sun and the light of day.

Older authors identified Belin with the Polabian and Lausatian Belbog (Eng. white god). In this, they were on the right path. Between the pantheon of Slav Polabians, Pomaranians and Lausatians, and the deities of ancient Carantanians, once we resurrect them from oblivion, there is considerable correspondence. All that is possible to ascertain also from their languages, folk tradition, and culture.

The worship of Belin in Oglej is recorded and preserved on some 60 inscriptions, dedicated to him. Besides these there are also altars and several temples.

Near Oglej there is today still a place called Beligna, a reminder of Belin temple in the past. In its place the patrarch Maxentius had built in the 9th century a benedictine abbey. Inscriptions honouring Belin were also discovered in nearby places, in Belvedere and Grade (Grazzo) and on the island Barbana. In Carnia his temple stood in the present town of Zuglio, Roman Iulium Carnium, where they discovered his temples some years ago.

Inscriptions in honour of Belin are evidence, that he was worshiped in Roman times also in the province Venetia. They discovered inscriptions in the ruins of cities Altinum near Venice and Concordia near Pordenon. Italian etymologists trace to Belin even the name Belluno in the broad valley of the river Piave, which was named Belenum during the Roman era.

Worship of Belin in the area of Noricum has been sufficiently supported by evidence. In Koroška region two inscriptions have been preserved from Roman times, dedicated to BELINO SACR on Ojstrovica and BELINO AVG SACR in Cigule (Zigguln), today a suburb of Celovec (Klagenfurt). About his worship reports Roman writer Tertulian (*c.160 –  + 254), who refers to him as Noricus Belenus. Beside this, it is possible to recognize Belin in other deities, particularly in the figure of Apollo, with whom they tended to identify him anyway.