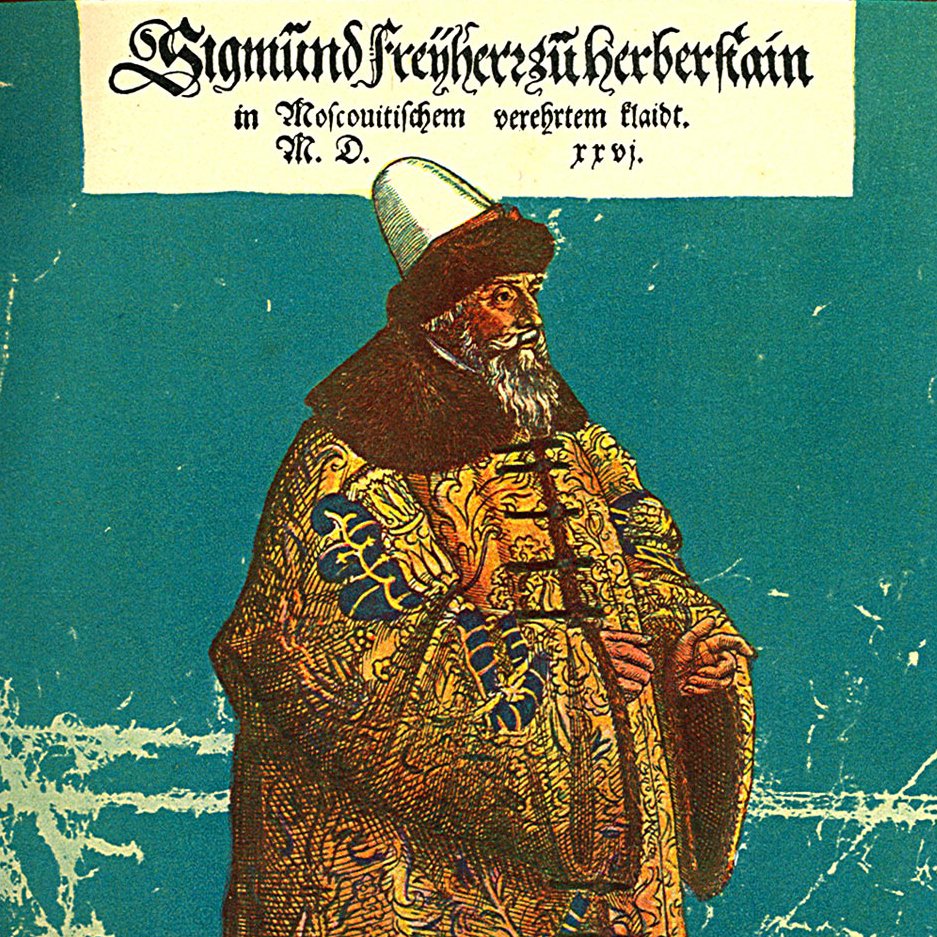 An eminent diplomat of the Habsburg Empire in the 16th century, Sigismund (Žiga) von Herberstein (1486-1566) was the first to make use of his knowledge of Slovenian language in his diplomatic career and in research. This resulted in his opening of Russia to western Europe Interestingly this occurred before the Slovenian Protestant reformer, Primož Trubar laid the foundations of the literary Slovenian language by publishing the first Slovenian school books, Abecedarium and Catechism in 1551.

Herberstein was one of the number of exceptional personalities born in Slovenian provinces of Austrian Empire, speakers of Slovenian and German, making their mark by considerable achievement and contribution to this central European society from the 16th to 18th century.

He was a contemporary of Jurij Slatkonja (1456-1522), the bishop of Vienna and initiator of the famous Vienna Boys Choir. A little later the composer and organist Jacobus Gallus (1550-1591) made his mark in the musical development of central Europe of the 16th century. The first focal point for the emerging reformation movement in Slovenian lands, centred around the bishop Bonomo in Trieste with Primož Trubar (1508-1586), who began his career as priest and Protestant reformer under the bishops’s patronage. He published the first books in Slovenian language Abecedarium and Cathecismus, and the New Testament between 1550 on to 1561. Janez Svetokriški (Joannes Battista a sancta Croce Vippacensi / John Baptist of the Holy Cross of Vipava), a Slovenian Capuchin priest born in Sv. Križ in Kras, famous for sermons and homilies, written in his native dialect of Slovenian Brda. They were published in 5 volumes from 1691 to 1707 in Venice and Ljubljana. About this time Johann Weichard von Valvasor was collecting directly from the people knowledge about life, work, beliefs and traditions, published in His Glory of the Duchy of Carniola (1689). In the 18th century, under the rule of empress Maria Theresa, Anton Janša (1734-1776) of Breznica in Upper Carniola was given the task of establishing an apiary college and begin a program for spreading apiculture practiced traditionally in his native Carniola, throughout the Austrian Empire, establishing the fame of Carniola bee (apis carniola). He is the author of Swarming (1771) and Complete Treatise on Apiculture (1775), still standard works today.

Sigismund (Žiga) von Herberstein was born in the family mansion in Vipava (Wippach), in Inner Austria of the Habsburg Empire, now the Republic of Slovenia, and spent his early childhood there. His parents were Leonhard von Herberstein and Barbara Logar, from a prominent Austrian family. Just like J.W. Valvasor 100 years later, we know that he grew up speaking Slovenian, the language of the surrounding country. More than that, we learn from his memoirs that he learnt Slovenian language in the local parish school.

It is generally assumed that his background was German, and that he grew up speaking German, but it might be conjectured that he was bilingual, growing up speaking Slovenian, the language of the country. Research has recently revealed that nobility of this time were to a considerable extent speakers of Slovenian, and often corresponded in Slovenian.

Add to this the fact that Herberstein was proud of his family background, which was, as he asserts that of poor hard working farmers. His love for Slovenian language may be ascribed to an awareness of his own heritage. It would certainly explain his insistence, interest and study of Slovenian to such an extent, that he was able to apply it to Russian and other Slavic languages at a diplomatic level.

In the Central Europe of the 16th century Latin was prevalently the language of the scholars, German the language of the towns, the officialdom and the court in Central Europe. In the provinces Carinthia, Caniola and Venetian March, the language of the countryside and partly of the towns was Slovenian. That it was also spoken by the nobility of the time has been now established through research on notables such as Trubar, Valvasor and Herberstein. It was strongly stimulated during the reformation and publication of such books as the New Testament and subsequently to the luxurious edition of Dalmatin’s Bible, which received strong financial support by the provincial nobility and wealthy merchants.

From the perspective of the role Herberstein’s knowledge of Slovenian language had later in his life, his career and life’s achievements, this becomes highly significant.

The family Herberstein moved from their mansion in Vipava to Upper Styria, taking residence in the castle Herberstein. We also learn from him that he chose to take lessons in Slovenian from the parish priest, and that he insisted on this, despite being ridiculed for it by his contemporaries. In 1499 he entered the University of Vienna, to study philosophy and law. Subsequently became an officer, and served in a number of campaigns. In 1508 he was knighted by Maximilian I, Holy Roman Emperor personally. In 1515 he entered the Imperial council, or Parliament, and began a long and illustrious diplomatic career. Between 1515 and 1553 Herberstein carried out approximately 69 missions abroad, on travels throughout Europe, including Turkey. He was sent twice to Russia as the Austrian ambassador, in 1517 and again 1526. These extended visits provided him with an opportunity to study a hitherto largely unknown Russian society, speaking to people and officials, and by reading Russian publications, which provided him with information on Russian culture completely unavailable at the time in Western Europe.

He was not merely the first emissary on an official visit to Moscow, he was able to communicate with Russians in their own language. This was due to his knowledge of Slovenian language, as he repeatedly confirmed.

On two extended visits he used his knowledge of Slovenian as a Slavic language, to investigate Russia, the land and its people. He published all he learnt in 1549 in Latin under the title Rerum Moscoviticarum Commentarii (Notes on Muscovite Affairs). A great and unique achievement, the book is regarded even today as the major work of the time in that field, and still the main early source of knowledge on Russia in Western Europe.

It could be said that with it he had also opened the Slavic speaking world to Europe, discoursing on the variety of Slavic languages from the Balkans to the far east.

He used the name Rus (Russian) for those, who spoke a Slavic language and were of Orthodox faith. He called “Moskvičan”(Muscovite) the subjects of the Great Knez of Moscow. “Slovenski” (Slovenian or Slavic) language extends, according to Herberstein very far, to Dalmatia, Bosnia, Croatia, Istria, Slovenian Littoral as far as Furlania, Kras (Carst), Carniola, Carinthia as far as River Drava, Styria, four miles down to Gradec (Graz) along the River Mura. He includes other Slavic speakers, Serbs, Bulgars and all inhabitants down to Istanbul. In the North he names Czechs, Lausatians, Moravians, Silesians, Slovenians along the River Vaga, some groups in Hungary, then Poles, Russians and Circassians on the Black Sea. Herberstein was possibly the first to identify and name all the speakers of Slavic languages, and of course quite specifically the speakers of Slovenian, while also establishing the fact that Slovenian ethnic territory has not changed since the 16th century, despite geopolitical changes, such as the establishment of the Illyrian Province by the French at the beginning of the 19th century, merging into the State of Yugoslavia after the World War I, and inclusion of Slovenian Littoral and other Slovenian ethnic territories into the Italian and Austrian states.

As was the case one hundred years later when J.W. Valvasor was gathering information for his great work, the language of the countryside was Slovenian. Like Valvasor, Žiga Herberstein grew up bilingual, and regarded Slovenian important enough to take lessons with the parish priest, at the time the most educated speaker of the language available.

One of the great and remarkable personalities of the Habsburg Empire in the 16th century Sigismund von Herberstein left a legacy for European and Slovenian history that can only be truly appreciated in our time. He himself points out in the introduction to “Moskovije” more than once how much the knowledge of Slovenian language benefited him in his mission and work on Russia, and he smilingly mentioned that he had to swallow insults from his contemporaries because of his interest and study of Slovenian language: “Yet this did not turn me away from Slovenian language, I spoke it whenever I had the opportunity to do so, and I was never ashamed of it, because I held it to be honourable and worthy.”