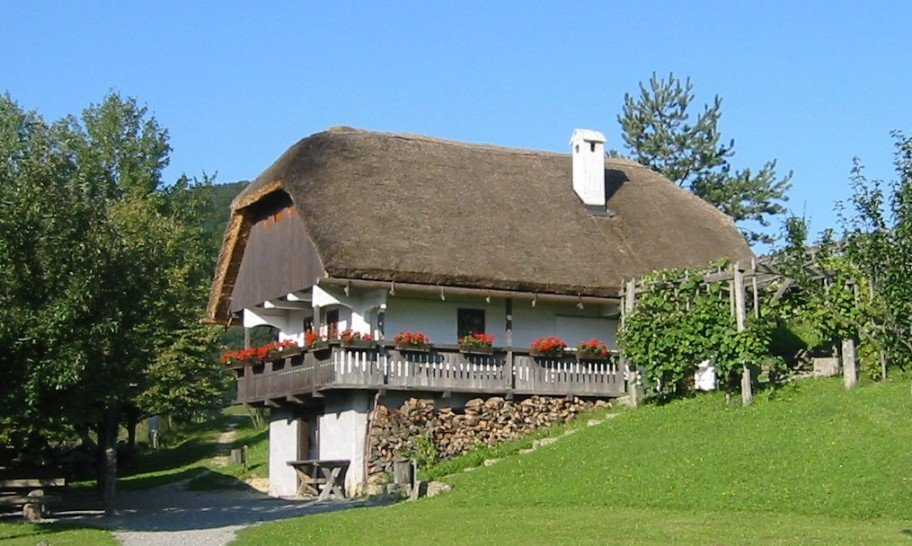 The townspeople of Rogatec, a small town in the lower Pannonian region, decided that they should establish an open air museum. They were among the first to do so in Slovenia. An association was established for the purpose, and work began in 1983. From the village Tlaka they transported the Šmit homestead, a dwelling house of the sub-pannonian type, and placed it on the selected location at the edge of the town. During the next four years the outbuildings were completed: double hayrack(kozolec/toplar), pigsty(svinjak), the well(vodnjak), then the apiary (čebelnjak), still in use today, vineyard cottage (viničarija), trellises (brajda), a country shop (lodn) of the thirties and the smithy (kovačija).

The single storey house, typical of the river Sotla region, was built in the years 1816 to 1818. This type of house, in its entirety built of beams coated with clay on both sides, is locally called cimprača. The roof with two tufts is covered by straw. The floor is made of clay, the walls coated with clay and whitened with lime. The spaces within are traditional: entrance hall (lojpa), the central black kitchen (kuhna) in the extension, on the right the living room (hiša) and smaller room (štiblc), on the left the girls room (hiška) and pantry (hramucl). In the kitchen there are two fireplaces, which heat the two adjoining rooms, an indication that the family was well-to-do.

The furniture is partly original, partly restored and partly replaced: beds, cradle, wooden chests, extendible bed (tobl), sewing machine, bread kneading trough (mentrga), hand mill (žrmlja), clay cooking pots, wall decorations. Girls slept in a specially appointed room until they married. For their protection the window of their room had an in-built iron cross, and it is said that door hinges were not oiled so that they would creak, and alert the parents, if anyone tried to enter in the night. In the štibelc slept the grandparents and the numerous offspring. The extendible bed, which served as a table during the day, was used to accommodate several children. The table cover was removed and a straw mattress placed within. When the boys grew up, they had to sleep in the hayloft (senik).

The stable (štala) with a field toilet and midden(gnojišče), is a two storied structure of elongated floor plan dating to the middle of 19th century. It was moved from the village Rjavica. The front is actually kozolec with battens, on the right facade is an open space for dry leaves (listnjak). In both these spaces there are exhibited a number of farming implements: the press(preša), treshing machine (mlatilnica), fruit mill (sadni mlin), winnowing shovel on the floor (vejalnik na podu), etc, and tools. On the built ground floor there was on the right the smaller stable and on the left the wine cellar (vinska klet). Above the threshing floor (pod). It is interesting that the floor in the stable was wooden, while in the house it was clay.

Pigsty (svinjak) was built in the second half of the 19th century and features 4 pig stalls (štalunce). Every stall has a side door, turned into the narrow passageway and an opening (bautare), for feeding the pigs from the outside. The ground floor is made of oak boards, which are tied crosswise with grooves, on corners and dividing walls. Unique is the asymetrical double-eaved straw roof.

The hayrack (Kozolec/Toplar) is 120 years old and came from the village Prišlin. It si used as shelter for large hay-loading vehicles (lojtrnik), a hayloft, space for storage and drying corn and other produce. It also reflected the standing of the farm.

The well is the pannonian type, with lifting mechanism (čaplja), such as we find in the broader area between Vienna and Romania.

Beehouse (čebelnjak) acquired the character of an independent building in the 19th century and became an integral part of the homestead. It is an indication that Rogatec with surrounding area has a rich beekeeping tradition. However, it is interesting to note that in this area there are no painted beehive panels, and the local population used straw basket beehives (korbiči).

Smithy (kovačnica) is a single cell building. Entrance is under an open stall, ensuring a dry entry for clients and cattle. The smithy is fitted out with all the essential tools: fireplace (ognjišče), bellows (meh), block (tnalo) and anvil (nakovalo)l, etc.

Vineyard Cottage(Viničarija) is a copy of vineyard cottage v vasi Dobrina pri Žetalah. It is used for the hospitality of the museum.

The open air museum in Rogatec is viewed by 15,000 visitors annually. It maintains the middle Štajerska vernacular building heritage of sub-pannonian type and the cultural tradition of people who lived on Sotla River plain from the 19th to the middle of 20th century.
The museum is the scene of many activities, such as demonstration of wheat threshing in authentic surroundings. The initial idea of maintaining the house as the birthplace of the poet Jožef Šmit, was soon replaced by the larger vision of an open air regional museum. In 1997 it was nominated for the European Museum of the Year, in 1999 it was proclaimed a cultural monument of national significance.