Matej Sternen (1870-1949) was the most independent of the Impressionists, both artistically and financially, deriving his income from the restoration of old paintings, for which he became celebrated, and teaching. As a youth he had attended art and craft schools in Graz and Vienna, and was so gifted that he was subsequently accepted into the Art Academy at third year level. In 1899 he went to Munich and to Ažbe’s school where he met Jakopič, Grohar and Jama. Painting with them at Škofija Loka he absorbed the impressionist technique in the spirit of the Slovene school, and the works and styles of the four artists were so similar at this time that they were unable to distinguish one from the other: 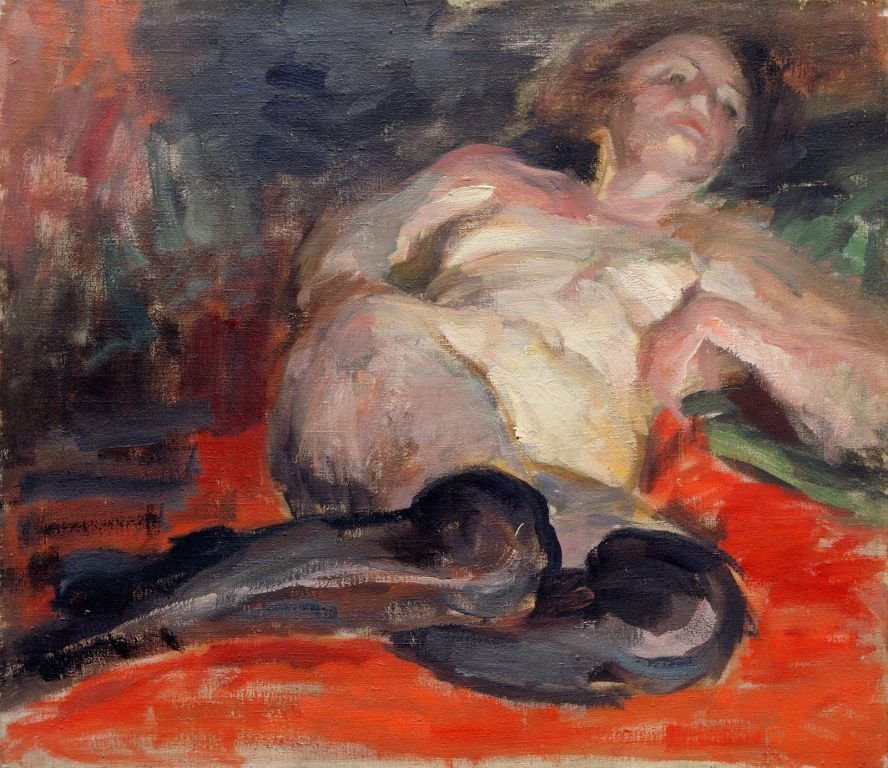 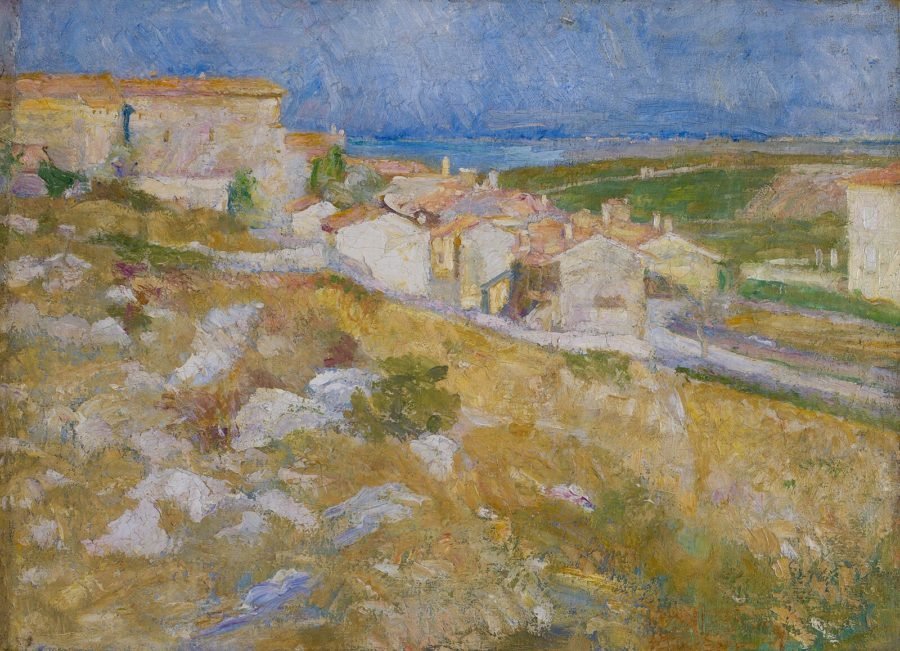 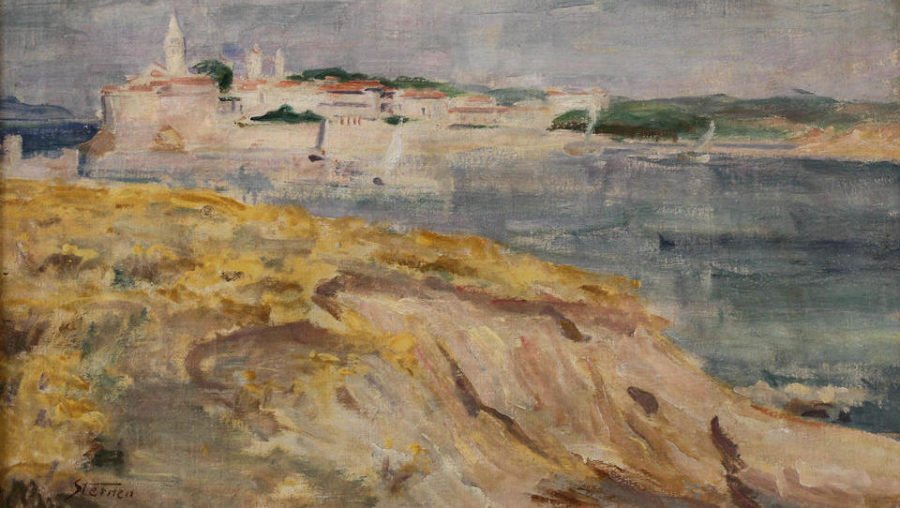 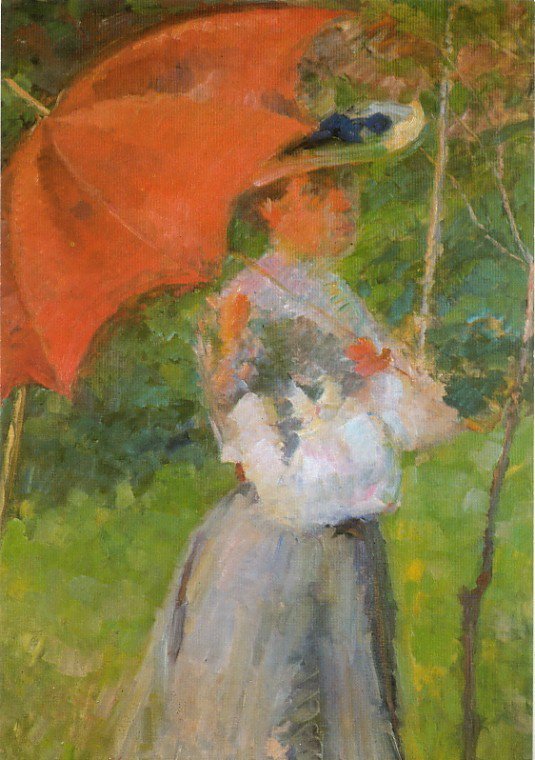 Unlike his colleagues however, Sternen displayed a preference for figural compositions, already evident in his Munich period. Studies of women and nudes first predominated in the mediums of watercolour and graphics, many sketches later being used as bases for his improvisations in oils. Sternen was a passionate draughtsman, relying more heavily on sketches and drawings as groundwork than did his friends, while his inclination towards realism ultimately drew him to portrait painting, a category least favoured by Impressionists.

Sternen was influenced by classic German studio art, but there are aspects that are new, and his ‘Redhead’ of 1902 glows with the light normally associated with the impressionist palette. It is dark in mood nevertheless, more so than is evident in French Impressionism, and the fin-de-siecle weariness of an urban generation seems present in many of Sternen’s works. It was a mood reinforced as much by the narrow and at times shadowed background as by the pose; ‘Seated Woman in a Pink Dress’, ca 1927. The painter’s landscapes are in contrast refreshing and brilliant; ‘Springtime at the Sea’, 1911.

The conceptual division between the openness of the landscape and the confined space of the interior emphasized the Impressionists’ aims and achievements; while Sternen’s adherence to his preferred subject redirected light and colour indoors. It also accentuated the aspect of self-absorption, an interest turning in on itself: ‘Portrait of a Woman with Self-Portrait in Mirror’, 1942.

With Jakopič colour was a substitute for space and the open window, as in ‘Memories’ 1912, but there is always a sense of air and movement around his figures even when they are surrounded by the dark. Like Matija Jama he also saw the outdoors as a natural setting for his figures; ‘Among the Beeches’ (1916). In contrast Sternen created a sense of confinement that is both internal, experienced by the people he portrayed, and external, being repeated in their material surroundings, and it suggested a reluctance or inability to draw the onlooker into an emotional response as occurs with Jakopič and his ‘Blind Man’, (1926), and Jama with his joyful Round Dance. Sternen was the first Slovene painter who dedicated himself to painting figures and nudes, although this interest was selective as females were his main subject. But in being faithful to Ažbe’s principle of respecting the object being painted – ‘so that the picture realizes the life felt and seen by the painter when experiencing the object painted.’ (France Stele, ‘Slovene Impressionists’), Sternen appears to have created a visual paradox in juxtaposing notions of physical and mental intimacy with that of distance and aloofness.

Ultimately he appeared more progressive or more worldly than his colleagues in his focus on figure compositions, while the unforced character of his broad and freely applied brushstrokes reveals how comfortable he was in his chosen genre. The informality of the poses of many of his subjects also makes his work seem very modern, as if he was anticipating the effects of contemporary photographic styles.

For Sternen painting remained a personal interest, and his development in this field is not easy to outline. He remained the most versatile of the group, applying impressionist painting techniques to frescoes (on the vault of the Franciscan Church of Announciation in Ljubljana), and taking up engraving. He was also familiar with and interested in photography, which he employed as an aid to his painting.

He appeared above all as a professional and practical man, not given to flights of inspiration as were Grohar or Jakopič. Gifted and active in different areas, his knowledge of and interest in diverse disciplines may have impinged on his development in any one field, inhibiting its growth; Sternen could focus on an object that caught his attention only for the time it took him to master its mechanism. No mystic, but undoubtedly an original, his work must be seen in the context of Slovene Impressionism, the Škofja Loka school and the Sava Club. Each of the four artists was different, but each complemented the other, and Sternen himself may be seen as bridging traditional art forms and their diverse application in the modern world. 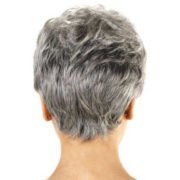