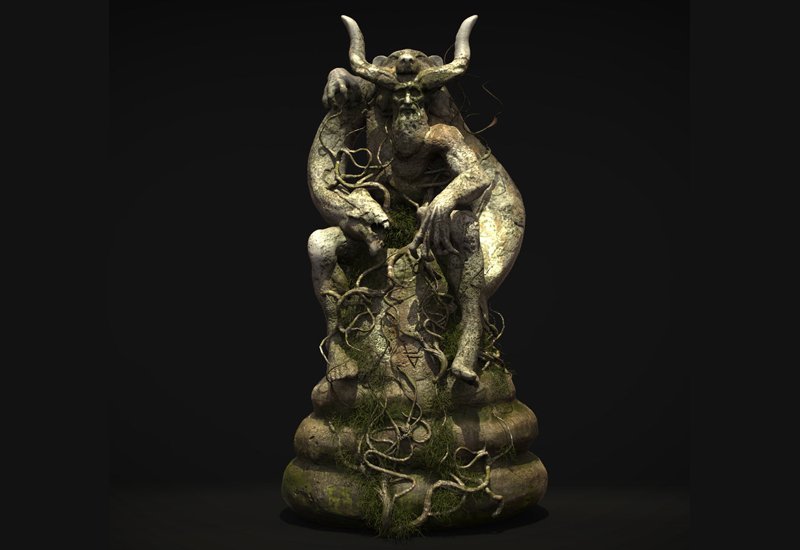 God Vodin can be traced back to the Venetic people who had settled in Scandinavia. There are also traces of him elsewhere, particularly in pre-christian Caranthania, where he had also been undoubtedly god of war. About him, as is the case of other deities, there are no written records.

Nordic mythology springs from merging of two cultures, the pre-Germanic and Slavic / Venetic. Among nordic deities the most visible of gods is Odin, the highest god in the Scandinavian and old Germanic pantheon. His name is Venetic. In connection to his origin, the following is said: The old Nordic Odin stems from the original name, Vodin, which still had the beginning consonant in its western Germanic form.

We can infer all these forms only from the Venetic root *vod and related verb “voditi” which means to lead in Slovenian. It seems clear that the name of god Vodin originaly meaning of leader or war leader has been shortened into Odin. This accords with the fact that Odin / Vodin was god of war among the deities of Scandinavian Veneti. He retained his name, when he later merged with the Germanic god of war. Odin was therefore originally a Venetic god. As god of war Wodan / Vodin was from the very beginning within the circle of the highest Nordic deities.

Among Caranthanian local deities during pre-christian era, we can find him in the romanized figure of war god Latobius, who had a visible place among the deities of the Roman Noricum, and was identified with Mars, Roman god of war. This clearly emerges from some carved inscriptions in his honor. However his Romano-Norican name Latobius was only adapted to the official Roman pronunciation and writing. His local name was evidently different.

His name was banished after christianization, and he became the Wild Hunter, and was associated with the wild hunt, a tradition that was widespread and particularly strong in Upper Štajerska region. In folklore the figure of Vodin was thrust into myths and stories and relegated to the role of the devil. In other myths we can recognize him in the figure of the legendary Kralj Matjaž / King Mathias, sleeping with his army in the mountain cave – the mother Earth.

However the figure of god Vodin emerges most clearly in his christianized aspect of St. Michael. In the church synod of 813 AD the Frankish king Louis the Pius designated the feast day of St. Michael on the day, that used to be the feast day of Vodin/Wotan. At the time the archangel Michael was the patron saint of the kingdom of Franks, later Holy Roman Empire. He replaced the pagan Vodin also in Carantania, but not in places, where Vodin’s temples stood, that is at Frauenberg near Lipnica, in Marjeta in Labotska Valley and on Šentlenska Mountain. In Germany where many mountains were consecrated to Wotan, he was replaced after christianisation by the christian saint. All over Germany numerous chapels on hilltops were consecrated to him (Catholic Encyclopedia).

This is true also of Carantania. On traditional Slovenian territory there are over one hundred churches consecrated to St. Michael. Many of them originate during the period of christianization in 8-9th centuries. The names of towns and villages were usually shortened to Šmihel.

Archangel Michael has a special role in the christian tradition. He watches over the souls of the departed and leads them into the next world. For this reason chapels and churches consecrated to him had a dual role in Carantania. They were both baptistries and ossuaries.

Leading the departed souls into the next world corresponds with the role of the ancient Vodin. It is possible that here we have the essential character of Vodin, transposed into the figure of St. Michael.